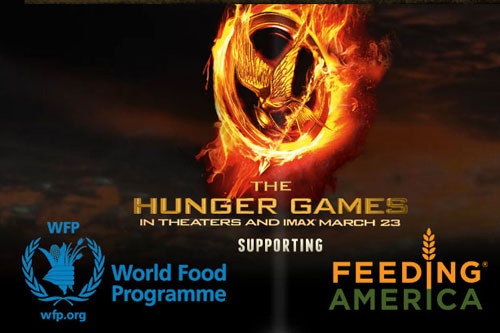 Bit of an odd mix, but Lionsgate now owns all these franchises -  and its stock price has been zooming delivering it to what many consider the top tier of film/programming producers. "The Hunger Games" though appears like the major catalyst. Set to have a huge opening weekend, the film cost less than $100 million to make and Promotions & Advertising is another $50 million. However, the estimate is it will gross close to $1 billion.


Perhaps more noteworthy though is the marketing plan that combines doing good with promotions. For the last couple of months "The Hunger Games" has teamed up with the United Nations World Food Program to raise awareness and funding in feeding the planet's most vulnerable. Nothing wrong with making a profit if you can do more good than harm. That has been the stated goal of ever more, and that's good - we look forward to seeing the good done? See our Blog for Video Report Below or at - "Film UN Join to Combat Hunger" - diplomaticallyincorrect.org/films/blog_post/film-un-join-to-combat-hunger/46467

FROM February 25, 2012 Article at www.diplomaticallyincorrect.org

“The Hunger Games” film & UN’s World Food Program team to fight hunger: Video starring the film’s cast, Jennifer Lawrence, Josh Hutcherson and Liam Hemsworth, was launched by the WFP and film studio Lionsgate urging fans to help end hunger. (Video is Site is linked Below) “This partnership will help us spread the word that hunger is the world’s greatest solvable problem,” said Nancy Roman, WFP Director of Communications, adding that millions of readers identified with the characters in The Hunger Games trilogy, and are excited about the upcoming movie, which will be released next month.


The first novel in the series, written by Suzanne Collins, was released in 2008 and has since been translated into 26 languages, selling over 800,000 copies. “We want to tap into that excitement, If all of us did just one small thing to fight hunger we could end hunger around the world. We are deeply grateful for the support of Suzanne Collins, who writes as though she understands hunger in the world, as well as Lionsgate and The Hunger Games cast – who have the power to change lives as they feed people worldwide,” added Ms. Roman.According to WFP, hunger affects one in seven people – almost one billion men, women and children around the world.

My Inner Dialogue Image Source: geraltvia pixabay Sanity: Why are you writing a Twilight review in …

One of the famous period drama in America is Mad Men. It produced by Lingsgate Tv and created by Mat…

Actress Kristen Stewart, star of "Twilight" has a relationship with her assistant

Although not much doubt in this regard, especially after a series of striking images published in Ja…