The Importance of Integrity, Perseverance, and Film School 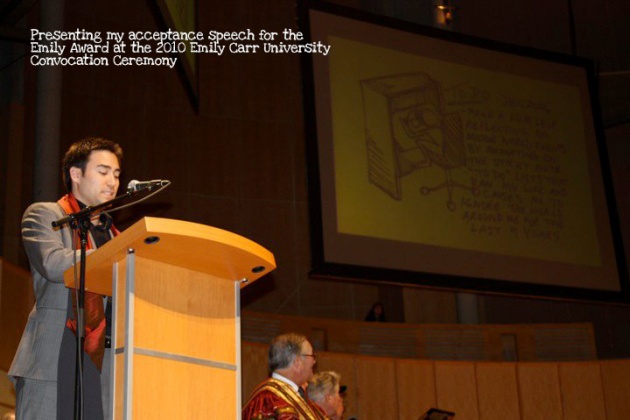 Back in 2001, I graduated from the Vancouver, British Columbia based, Emily Carr University of Art and Design with a Bachelor of Media Arts with a Major in Film Animation.  It was a four-year degree program where I learned how to animate and make independent films.  Fast forward a few years…in 2010, I was the recipient of the Emily Award, an award given once a year by my university in recognition of outstanding achievements by an alumni.  This post is inspired by the acceptance speech I gave at the 2010 Emily Carr Convocation Ceremony.

At the time, I was completely honoured to receive the award but I found it all very ironic considering that a few years before, I had been rejected after applying to the Emily Carr Masters Program and eleven years before that, I was rejected from the Emily Carr animation program.  But as things would have it, I was placed on a waiting list to get into the animation program.  Luckily, the stars aligned and in 1998, someone gave up their seat in the animation program - which lead me to giving up a full fine arts scholarship from my hometown university and moving to Vancouver.  All to chase a dream that started when I was eight, after watching the Academy Awards with my parents and discovering you could win an Oscar for making cartoons.  A dream I still aspire to, to this day.

And even though I didn’t get my Emily Carr masters degree, as things would have it, I used that fuel of rejection and jealousy to self reflect and in turn would inspire me to create what would be my most successful and award-winning film to date, Yellow Sticky Notes, which, ultimately was a factor that lead to me to being awarded the 2010 Emily Award…weird…I know!

The great Looney Toons director, Chuck Jones once had his art-school professor say to his class “All of you have one hundred thousand bad drawings in you. The sooner you get rid of them, the better it will be for everyone.”  Going through the Emily Carr animation program helped me get out a few of those really bad drawings, and although it took me a few years after graduation to realize it, developing a personal style would be more important to me then being able to draw well enough to get a job at Disney.  What I never would have realized back in animation school, is how that personal style would lead to where I am today – at a point where as one of my greatest inspirations, the great mythologist, Joseph Campbell, would say, I have found my bliss!

Although early on, following my bliss lead me to think being a pro snowboarder was a good career path…until I broke my drawing wrist, and being in a punk band would lead me to stardom…until the band broke up.  It has been a strange and crazy road chasing my bliss of becoming a full time filmmaker. 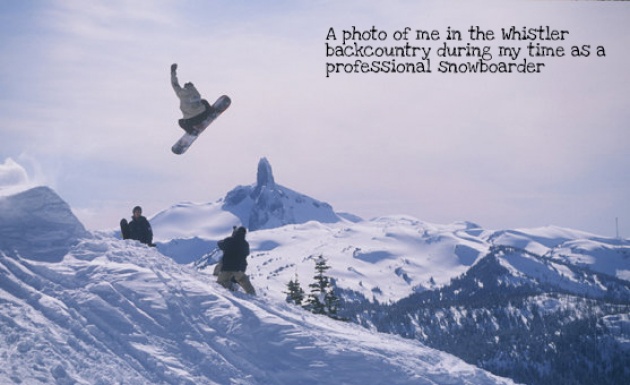 Getting to this point, took a lot of tough decisions.  A year after graduation, 911 would destroy the animation industry in Vancouver and with no jobs in sight, broke and defeated, I swallowed my pride and moved back in with my parents in my hometown of Kelowna, BC.  But from there I picked myself back up and I became a high school art teacher in hopes of a steady paycheck.  What I would soon realize, is that my parents were proud of me no matter what I did and being an art teacher is a noble career – and is one of the many reasons students decide to pursue filmmaking and animation as a career.  And now even though I don’t teach high school anymore and I moved out of mom and dad’s, I rarely ever turn down instructing a workshop, giving a guest lecture, or offering advice to future animators.  Because as a graduate who has learned a craft, I feel I owe it to others to inspire and pass on knowledge to future creators who would give anything find their own bliss.

Through some perseverance, I eventually started my own production company, Meditating Bunny Studio Inc., I'm working on my second feature film and after traveling to multiple film festivals around the world for the last eight years, learned that no matter what part of the world you are from, everyone values honesty, nobody likes egos, and integrity is a mighty asset.   These days I often find myself working 16 hour days 7 days a week but I work for myself and I am finally able to make a living solely through creating.  Although, my most important achievement is that I have held true to the filmmaking philosophy I developed at Emily Carr; to produce content for children and adults that combine different philosophical and social elements together to create humorous, inspiring and entertaining stories.  Even with commercial projects, I never stray from this philosophy because integrity is what brings meaning to my art and my life. 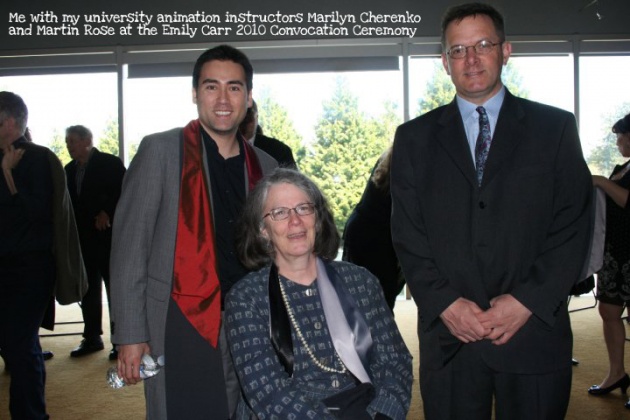 When I look back at my experience attending Emily Carr, I realized it wasn’t just about learning a craft, it was about maturing my art making and most importantly growing up.  Emily Carr for me wasn’t about putting human excrement into a Ziploc bag, sculpting genitals out of clay, or leaving meat sculptures to rot in the concourse gallery.  Although after watching so many students do that year after year, I also realized that going to art school wasn’t just about achieving a higher form of education, it was about making mistakes, working through clichés, taking risks and failing, and cringing nine years later when I watch my grad film, The Horror of Kindergarten.  Emily Carr was a place where I had a chance to get out some of my bad art and take pride in some of the good art I did create, and that has made all the difference.  The hope is that once you graduate, you are capable of making only good art.  Although, knowing what is good art will take you a lifetime to discover, and what you consider good art today you probably won’t think is good art tomorrow.  No matter what route you take after graduation, the path to finding your bliss is never easy and there will be many wrong turns…but in the end what I learned is there are many exits, just don’t be certain the first exit is always the right one.

As a former college animation instructor, the next blog post will be my advice on how to find the right animation and film school.