Model cars, model houses, guns in soldiers and plastic planes. Jack-in-the-box. Blocks. Balls. Dolls. All these are toy- objects that can give us hours of fun and amusement. There are, of course, hundreds of other kinds of toys. In fact, it seems that children today have an endless variety from which to choose. 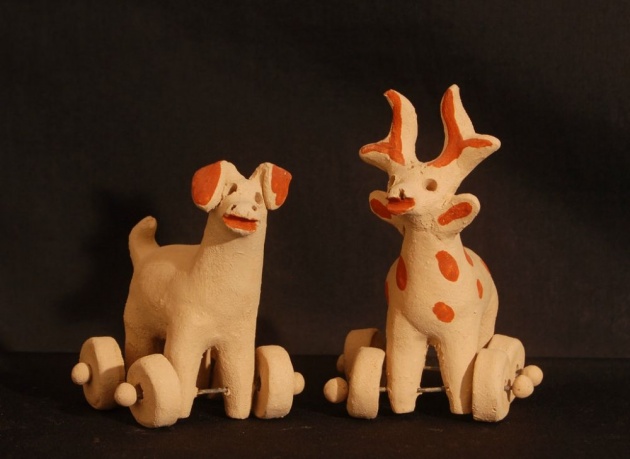 One of the simplest toys, a set of simple wooden blocks is also one of the best toys for developing minds.Andrew Witkin, director of marketing for Mega Brands told Investor's Business Daily that, "They help develop hand-eye coordination, math and science skills and also let kids be creative."Other toys like marbles, jackstones, and balls serve similar functions in child development, allowing children to use their minds and bodies to learn about spatial relationships, cause and effect, and a wide range of other skills.

PLAYTHINGS OF LONG AGO

The earliest people did not have as many toys as we have today. Fathers were busy hunting wild animals for their skin and meat. They had to find food and clothing, and shelter from the wind and rain. And so we believed that when a father went hunting with his bow and arrow spear, his small son copied him and made himself a small bow and arrow. Or perhaps made a spear out of a dried and sharpened reed stem.

When a mother began modeling the first rough cooking vessels out of clay, her little girl may have made a small pot to play with. Perhaps, mother had a new baby. Her little daughter watched and then went out and made herself a baby out of the twisted branch of an old bone. And that was the first doll.

Later, when people had learned to make tools and to build houses, life became easier. Fathers and mothers had time to make toys for their children. They modeled clay dolls with movable arms and legs. They carved wooden animals with wheels that went round, or jaws that opened and tails that wagged when you pulled a string. They began to make rag dolls, too and squeaking dolls with bellows inside.

Children found that playing ball was fun. They had marbles of stone, They played knuckle- bones, or dibs, with the bones of animals. They skipped with skipping-ropes made of vine stems.

We know a great deal about these early toys. We have been discovered in the sands of Egypt and in Ancient Greek and Roman Tombs where they have lain for centuries beside the little boy or girl to whom they belonged.

Toys dating from between 2000-3000 B.C maybe seen in museums in all parts of the world. In the British Museum, in London, there is a working model of a woman with a rolling pin and board from 5th-century Greece. The Leiden Museum in the Netherlands has a model of an Ancient Egypt of a man grinding corn. An ancient crocodile still snaps its jaws in the Berlin Museum and so does the model of a lion at the museum at Alexandria in Egypt. 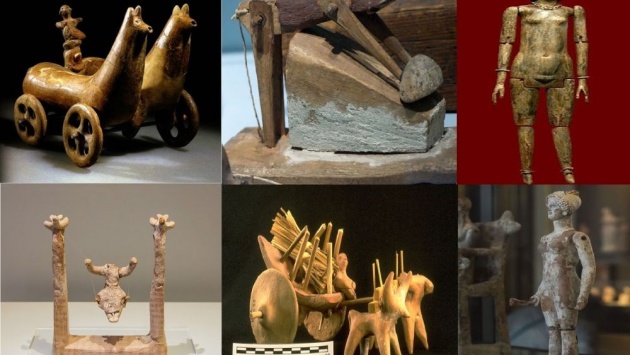 Image © Sincere TV via Youtube: These clay toys from the Indus Valley were made between 3000 and 2000 BC. 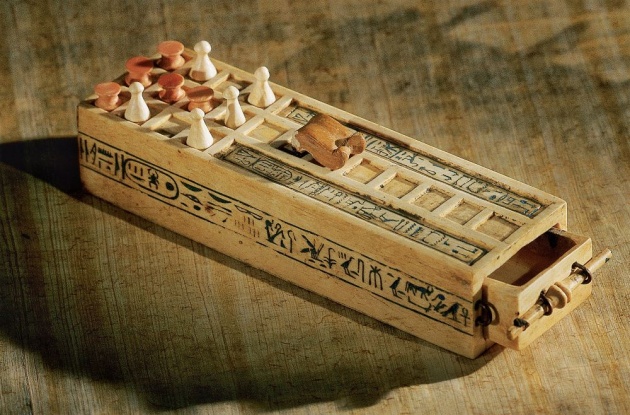 Image © Pinterest: This ancient Egyptian gaming board may have been an early version of the draught board. 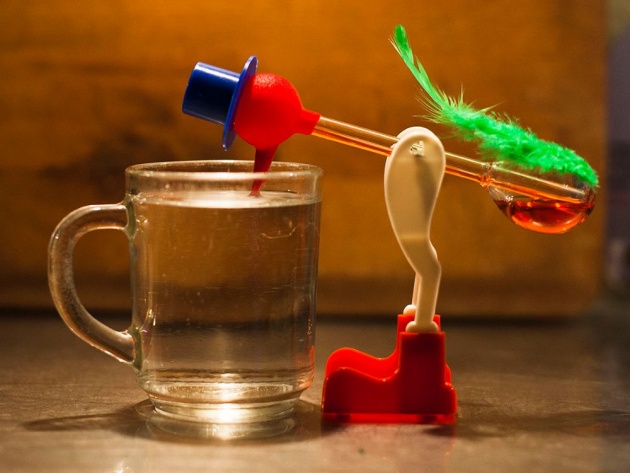 Image © Coolgate: Simple movement toys such as bobbing bird were popular in 1600s. 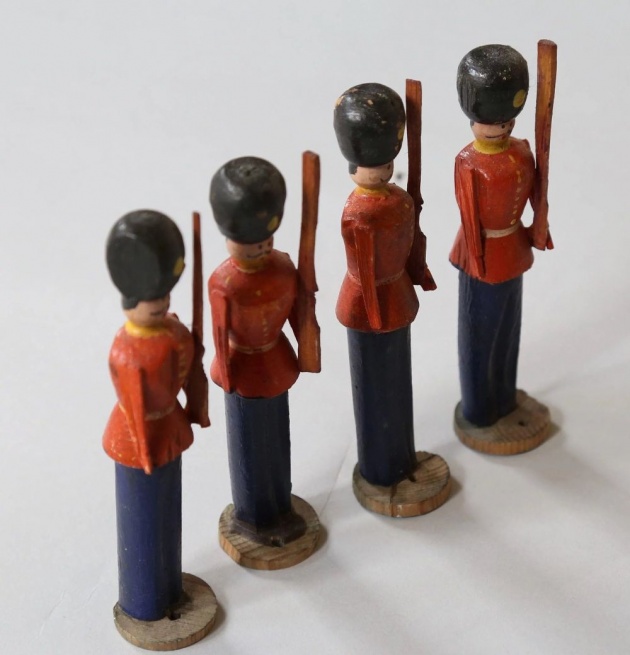 Image © Rubylane: During the Middle Ages, wooden soldiers were the favorite playthings.

TOYS IN THE MIDDLE AGES

Few children's toys remain from the period between the Ancient and Middle Ages. In the 12th century, however, children played with the spinning-tops, balls, and pop-guns. They played marbles and balloons made of the bladder skin of animals. They played with dolls and toy soldiers. The soldiers were single figures of glazed stone or metal. Toy armies did not appear until the 18th century when they first made in honor of Frederick the Great.

There were no toy shops in the Middle Ages. Toys were sold at market stalls, which also stocked other sorts of goods. Peddlers also carried toys in their packs. Booth and stalls were set up along the bridges crossing two both great rivers, the Thames in London and Sienne in Paris. On days where fairs were held, children bought toys and the stalls and played along the river-banks. Today, both cities have collections of toys dug up from the river mud, where children lost them more than 4 centuries ago.

Dolls were still made of clay or rag or crudely carved woods. There were no baby dolls, and men dolls were rare. Most were women dolls, with long-high-waist dresses. Many had no legs but were made to stand on solid stumps.

A range of artefacts, however, are now being recognised as children’s toys, and these are producing a more rounded picture of childhood in medieval and early-modern Britain.

These artefacts are mainly miniatures, representing both human figures and household and military objects. Hundreds have been found over the past 20 years in London alone. We also know of toys such as tops, balls, hoops and kites, either from excavated or pictorial evidence, but these survive in fewer numbers.

Until the 14th century, all toys were made by people in their homes. During the 1300s, however, a toy-making-industry was started in Sonneberg and Nuremberg in Germany. It grew and it was successful for more than 400 years. Toy-making was a family business; each member had a part to play. The men carved and molded the animals and dolls. The women and children colored them, made the arms and legs and sewed the clothes. Toy-makers had no time to sell their own goods, so they employed tradesmen to sell their toys in distant towns and villages. Greatly the loaded carriages brought wooden toys from Saxony and metal toys from Nuremberg to the seaports. from there, they were carried by ships to countries all over the known world.

The 17th century was the age of simple movement toys. Jumping Jacks and monkeys-on-a-stick were seen at every fair. Other jacks leaped out of their boxes on coiled springs. Balanced toys swung dangerously from side to side but never toppled over. Pecking birds bobbed up and down at the swinging of a pendulum. Cheerful little tumbling clowns with weighted bases bobbed and dipped in all directions.

The toy horse was a popular plaything for centuries. It was first made out of clay. Then it became a toy to be played along rough wooden wheels. IN the Middle Ages, it was out on a stick and became a hobby-horse. Still, later, toy horses were made on a solid wooden platform on little wheels. Then a padded seat was put on the horse so that children could ride through the rough cobbled-stoned streets in comfort.

In the 18th century, the rocking horse came into fashion. The first rocking horses were cut out of solid wood. The legs were only marked in outline. As time went on, the figures became more and more life-like. The true home of a rocking horse in England. By 1877 there were 11 makers of rocking -horses in London alone. 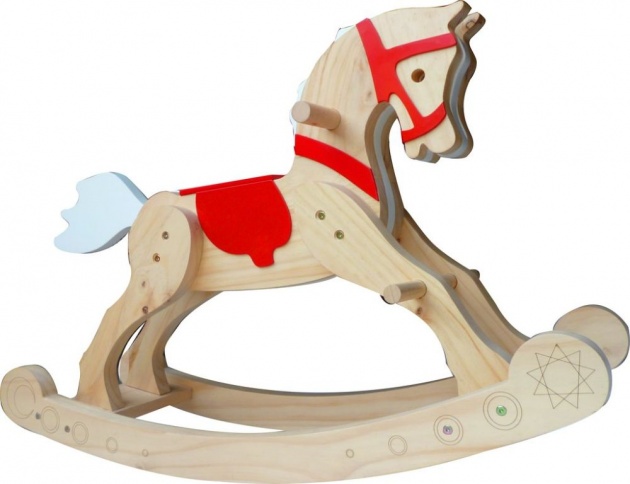 Image  © Laybuy: The toy horse, built on wheels, was a forerunner of a rocking -horse.

Simple movement toys in the 17th century led to clockwork toys that performed all sort of wonderful actions. Dolls could walk and can dance and sing and say 'Mama' and 'Papa.' This was done by means of a device called bellows, which worked when dolls' arms were raised.

Several years had passed, a performing monkey that played the violin was invented. Bears drank from the bottles. Cats and rabbits played solos on the harp and the guitar. Singing birds turned their heads and hopped from tree to tree. Most of these expensive mechanical wonders came from France; the musical parts were made by Swiss watchmakers.

After 1889 clockwork toys began to lose their popularity. In America, Thomas Edison's experiments with electricity were to change children's toys. His new gramophone became a part of a delightful toy. Twelve prettily dressed dolls stood in a raw on a small stage and repeated a nursery rhyme one by one. The record could be changed so that the dolls did not always recite the same poem.

Scientific toys of all kinds were very popular in the 19th century. There were a number of toys that produced a moving image by spinning colored pictures. Some of these inventions had strange names, like Phantasmagoria, Phantasmascope, Zoetrope, and Thaumatrope. The most important of these toys was the magic lantern. It was the grandfather of the moving picture. Today the kaleidoscope is the only one of these toys that survive. It still enchants us with the magic of its tiny pieces of colored glass and metallic paper, multiplied by mirrors so that they form ever-changing patterns. Throughout ages, the toys have mirrored the grownup world. There seems to be no scientific invention, no progress made in transport, no part of living that does not have its counterpart in the toy shop. Rockets, spaceships and space suits show all the latest advances in science and space travel. 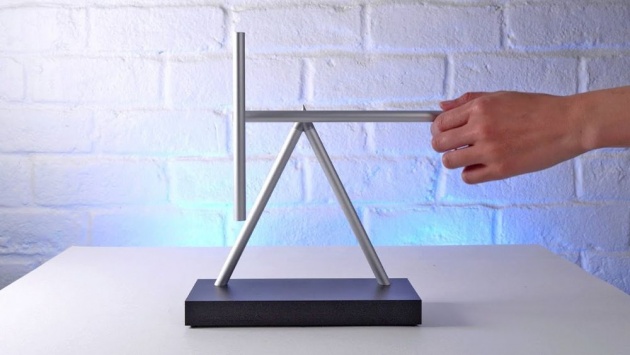 Image © Youtube: Some toys, such as the chemistry tools set of toys, are made not only for play but for education.

The educational toys were made in the 19th century. Today, there is a major part of the toy industry. Building blocks, jigsaw puzzles, and peg-boards help the young children to learn the different colors, sizes, and shapes. Microscopes, prism, magnets and chemistry sets make the older child more interested in science. Games online and puzzles are often used to help children understand mathematical ideas. Special toys have been developed for handicapped children.

Educational toys play an important part in a child's life at home and at school. But there are toys to fit in with every part of children's lives. There are buckets and spades, and rubber toys that float, for the seaside; sleds, skates, and toboggans for winter sports.

Among all the modern toys there are still old favorites which have been made for years. Balls, hoops, rag dolls, pull-along toys, and rocking-horses are just as popular today as they were hundreds of years ago.

The list credits, by the article, the sources of illustrations, used by the author of "The Make-Believe-World of Toys". Credits are listed below separated by a comma.
Youtube.com, Pinterest, Laybuy, Rubylane, and Coolgate.

All rights reserved. No part of this article
may be reproduced without special credit
in writing from the publishers of wikipedia.com.