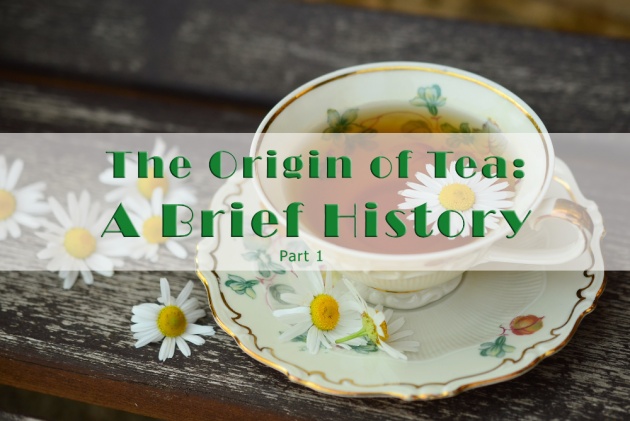 My last blog was about the history and origin of coffee and it was indeed a fascinating one. While writing that, I came across another beverage with an equally interesting backstory--and just as controversial. I'm talking about green tea, of course. Yes, green tea has a long and complicated history before it became what we now know today. So, if you're a tea lover, come join me in this rollercoaster ride as I take you through different continents

The Birth of Tea

The story about the origin of tea is just as fascinating as coffee. Just like coffee, the legends surrounding its origin is a mix of myth and fact. It is also not exempt from controversy and politics. But, unlike coffee, the history of tea is also colored by ancient concepts of philosophy and spirituality. There were two famous legends regarding the origin of tea and they came from China and India.

Some stories suggest that tea originated in China. As the story goes, the legend began in 2737 B.C.E. when a Chinese emperor named Shen Nung accidentally discovered it. He was sitting beneath a tree while his servant boils him water. It was a serendipitous event that involves boiling water and falling leaves. As he was sitting and relaxing beneath a tree, his servant boils some water for him when some leaves from the overhanging branch fell on the cauldron of water.

Shen Nong, a skilled warrior and renowned herbalist, was curious what this new concoction tastes like so he took a sip. 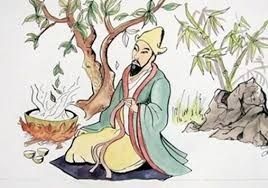 Coincidentally, the tree in question was a Camellia sinensis--the same tree where modern green tea leaves come from. The emperor was so enamored with this newly discovered drink that it compelled him to learn more about the tree from which the leaves came from. During his research, he learned about the tree's many medicinal properties--and from there on out, tea has become a favorite drink of the Chinese.

Indian history would like to differ on the first legend as it also claims to be the birthplace of tea. According to Indian legend, tea was discovered by Prince Bodhidharma, an Indian Buddhist monk.  He and his mentor traveled across India to spread the beliefs and knowledge of Buddhism. After his mentor passed away years later, he left India to fulfill the last request of his master which was to spread the teachings of Buddha in China.

Bodhidharma is considered to be the founder of Chan Buddhism in China--later called Zen in Japan.

To prove that some of the principles he is teaching are true, he swore to meditate for nine whole years--without sleep. As the story goes, he fell asleep towards the end of his meditation. 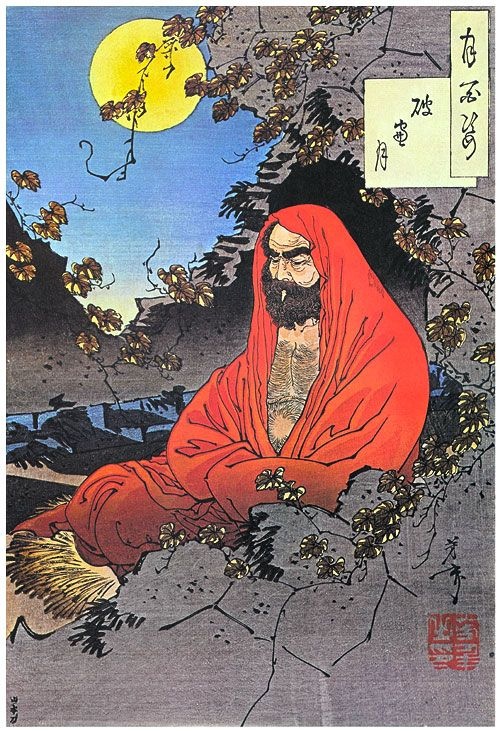 He was so upset with himself that he cut off his eyelids and tossed them on the ground. It is said that a tea plant grew on the spot where his eyelids landed to honor his sacrifice. 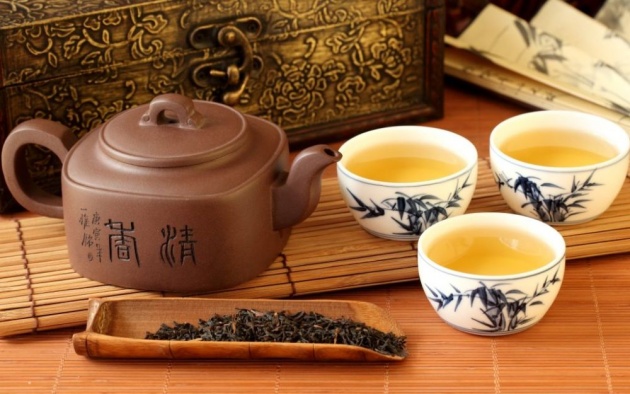 Trying to determine the real origin of tea is difficult, especially since it has already been so long ago since it was first discovered. However, it is highly possible that it originated in East Asia, particularly regions surrounding Southwest China, Tibet, and Northern India. Many people around these areas chew tea leaves for their medicinal properties--and it's possible that Chinese traders who ply this route have encountered these same people in one of their travels. Tea drinking became established in China many centuries before anybody in the west had even heard of it. To prove this claim, containers of tea leaves have been found in tombs from as far back as the Han dynasty.  However, it wasn't until the Tang dynasty that tea became a popular drink all across China. In fact, the Tang dynasty is often referred to as the classic age of tea. In fact, it was also around this time that tea was recognized as the national drink of China. The government also imposed tea tax on its people--which further proves the growing popularity of Tea.

Tea was so popular that Lu Yu, a Buddhist monk during the Tang dynasty, even composed the Tea Classic (Ch'a Ching), the first known monograph on tea in the world. The types of teas and their uses are all described in the Ch'a Ching, as well as the preparation and the benefits of drinking tea. Lu Yu believes that tea symbolized the harmony, simplicity, and mysterious unity of the universe--and so he imbued that belief into his writings. He also added a dose of his spiritual beliefs into the Ch'a Ching that heavily reflected Buddhist, Confucian, and Taoist religious thoughts of the time. However, Lu Yu's original work is lost up to this day. The earliest edition found date back to the Ming dynasty.

Poetry and artistic reference to tea overflowed during the Sung dynasty--which later became known as the romantic age of tea. It was also during this time that the Chinese culture had significant influence over art, politics, and religion in East Asia.

Saicho, a Japanese Buddhist monk, is said to be the one who introduced tea to Japan around the early 9th century. The Japanese emperor granted Saicho's petition to travel to China in order to further study Tiantai doctrine and bring back home some texts back to Japan.

During his stay in China, he discovered more than just texts and scriptures; he also discovered tea.

On his way back to Japan, he brought some seeds with him--which he planted at his monastery. Other monks soon followed in his footstep and small plantations inside secluded monasteries started sprouting up. However, the seclusion of these monasteries is also the reason why tea did not become popular in Japan until the 13th century. 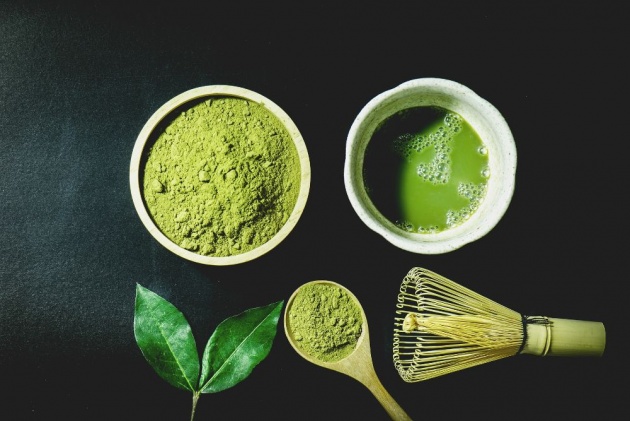 The most popular way to prepare tea in Japan involves grinding the leaves very finely until it looks like a powder with the use of a stone mill. Yes, you guessed it. This powder is called Matcha. The Matcha tea was popularized by the Zen Buddhist  Eisai and was used as a precursor to the traditional Japanese tea ceremony (Chanoyu). Matcha is prepared with the use of bamboo whisks (chasen) which will then be served in hand-crafted bowls (chawan). 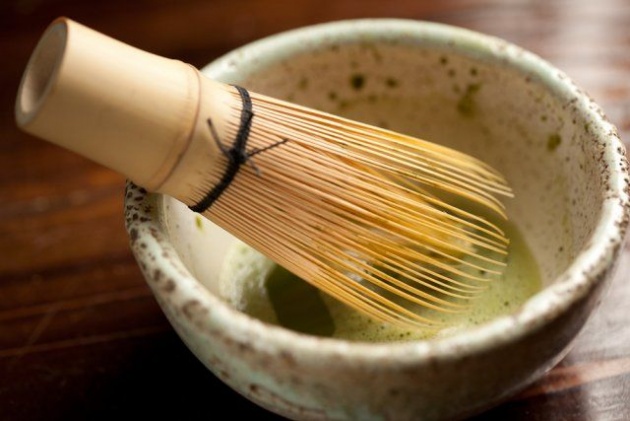 The modern way of steeping dried tea leaves was not discovered until the Ming dynasty. Tea leaves were dried, rolled, and heated using iron woks to stop the oxidation process without having to compress tea leaves into bricks or grinding them with stone mills. The process of brewing is also much simpler. Anyone who wants to enjoy a cup of tea simply needs to steep the tea leaves in hot water-- whisk not needed. 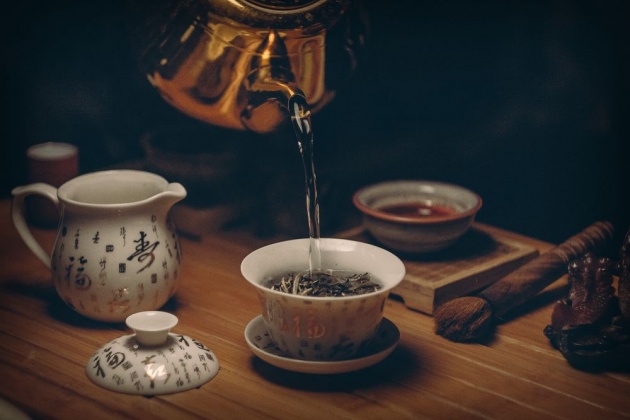 This rolled tea and the modern way of preparing it was brought to Japan by a Chinese monk in the 17th century. And, of course, because this is Japan we are talking about, Soen Nagatani, a Japanese merchant in Kyoto, invented a new way to steam, dry, and roll green tea in the 18th century--which resulted in a new type of tea called Sencha. This process has become a mainstay in the Japanese tea culture.

Tea has such a long history that I cannot tell it to you--or give it justice--in just a single blog. That's why I'll give it to you in parts. This is just the first part, but it's already fascinating. Trust me, you want to hear the rest of the story as the plot thickens.

Does your tea always have a bitter aftertaste to it? You're probably steeping it wrong. Here's a video from Chowhound to show us how to properly steep tea leaves.