The Shadow of Reichenbach Falls: The Lost Sherlock Holmes Novel?

Sherlock Holmes pastiches are a dime-a-dozen, with authors placing Holmes in the midst of investigations dealing with everything from Lovecraftian monsters, to vampires, to demons, to time travel. John R. King's The Shadow of Reichenbach Falls, on the other hand, teams Holmes up with none other than Thomas Carnacki, Ghost Finder.

You don't know who Carnacki is? Well, if you're a fan of Sherlock Holmes and his ilk, you might have heard about him. The creation of author William Hope Hodgson (1877-1918), Thomas Carnacki was featured in nine stories by Hodgson, all dealing with Carnacki's investigations into supernatural, or seemingly supernatural, occurrences. The Carnacki stories are not as well known as Holmes's tales of meticulous deduction, but hardcore fans of weird fiction know about them, mainly because of how strange and compelling these stories are.

In The Shadow of Reichenbach Falls, John R. King (the author of more than twenty novels under the name J. Robert King) attempts to write a Holmes pastiche set between the stories The Final Problem and The Adventure of The Empty House, and an origin story for Thomas Carnacki.

The story centers on Carnacki, along with Professor Moriarity's Daughter, Anne, rescuing Holmes from certain death, only to discover that Holmes has no memory of who he is. Meanwhile, Moriarity, who is very much alive, is after Holmes, intending to kill him for ruining his empire of crime. Add to that demons, crazy doctors, Jack The Ripper, and botched exorcims, and you get The Shadow of Reichenbach Falls.

So does the whole thing work? Mostly, yes. King's writing is clean and energetic. His characters come to life on the page, and the middle section, written in the form of Professor Moriarity's diaries, is nothing short of riveting. But the whole plot doesn't gel with Arthur Conan Doyle's tales, or his style, for that matter; and fans of Carnacki will be slightly disappointed by King's refusal to delve deeper into the ghost hunter's past (although he does explain how Carnacki came upon his "Electric Pentacle").

Overall, this is an entertaining ride, full of interesting ideas. But as far as Holmes pastiches go, this might be too fantastical for some readers. 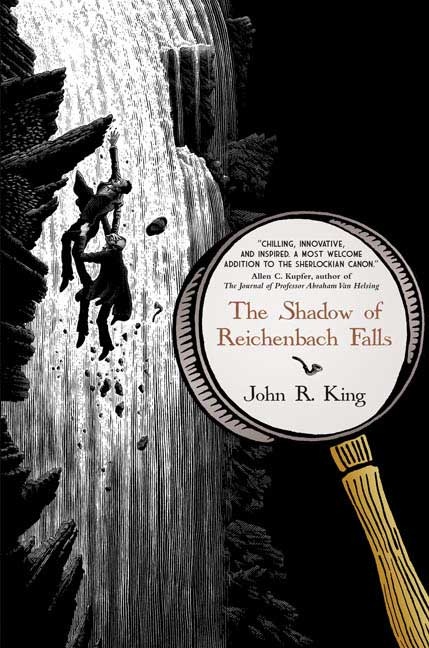 About the author: Ahmed Khalifa is a filmmaker and writer. He is the author ofBeware The Stranger, a horror novel, and Egyptian Gothic: Stories. Both books are available on Amazon here. He is also the director of The Weapon, Egypt’s first action/supernatural Web Series, which centers on a vigilante called “The Hunter”. You can watch the complete first season, for free, here.

Image Credit: CBS via IMDb "The Grand Experiment" is episode twenty-four of season two of Elementary…

Elementary - Art in the Blood

Image Credit: CBS via IMDb "Art in the Blood" is episode twenty-three of season two of Elementary, t…

Image Credit: CBS via IMDb "Paint It Black" is episode twenty-two of season two of Elementary, the m…

Elementary - The Man with the Twisted Lip

Image Credit: CBS via IMDb "The Man with the Twisted Lip" is episode twenty-one of season two of Ele…