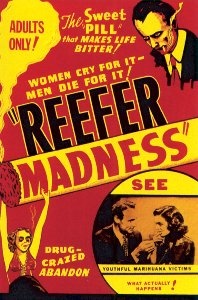 "Reefer Madness" was released in 1936 as a propaganda piece warning of the dangers of 'dread marihuana.' There's a great rolling prologue to lead off the film introducing us to the new drug menace that the film will be based around. We're immediately in some form of a PTA meeting led by a Dr. Carroll (Joseph Forte) who details the facts, stats and stories around ganja. We learn that weed grows wild in every state in the country and as Dr. Carroll describes a field of pot in Brooklyn to be sold in NYC, there's a shot of some po-pos walking around an empty lot with doob plants and there's a closeup of the shittiest looking plant I've ever seen. If I had to smoke that crap, I'd probably be crazy too! Low and behold, the icky sticky (or anything but by the looks of it) destroys the lives of the folks in the film's story. From maniacal laughter upon the second hit, lots of dancing and a loosening of sexual inhibitions right on up to rape, suicide and murder, the green will get you. 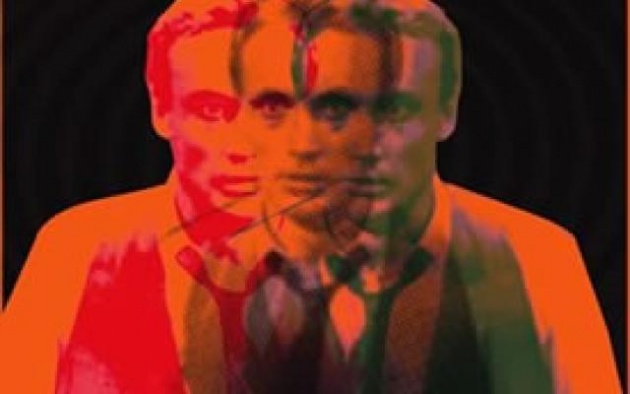 The film was at least partially financed by a church group and was directed by Louis Gasnier, who had been a prolific silent film director with Pathe in France and in America. None of the actors were anything special and the movie is laughable. It was a commercial flop but very well may have aided in initiating a federal prohibition of mary jane one year later in 1937 that still stands today. "Reefer Madness" was originally titled "Tell Your Children" and all but disappeared until it was unearthed in the early 70s and dragged back out and introduced to a new generation as a campy cult film about cannabis driving people bonkers. The anti-prohibition NORML started using it to show at colleges to depict the unreasonable hysteria that some may have about the cheeba. And so it is that a film over 75 years old intended as seriously anti-dank, stands today as a classic cult film that one might actually enjoy some herbage beforehand.

I have watched this movie a handful of times since high school and it is definitely worth a little over an hour of your time at some point. "Reefer Madness" is a testimony to the power and enduring legacy of films. One film can be seen through many lenses over time. Someday, a century from now, critics may look back and decide that "Ishstar" was one of the greatest films of the late 20th century with that great comedy duo of Warren Beatty and Dustin Hoffman. "Dances With Wolves" won an Oscar!! However, whether a film has been deemed the worst ever or the best ever or whatever widely accepted (anti)acclaim is attached to it, that film has triggered something in a good chunk of folk. Beauty and or remarkability can be found in many different spaces if our eyes are open (and not just from the chronic!).

Watch more remarkable films on Baxter Martin Web TV and all throughout FilmAnnex!

True Story Behind the 'Lawless' movie

Welcome to another blog about prohibition. I am now pretty sure that I will make serial of blogs abo…