Two Months on bitLanders, and What I've Learned So Far 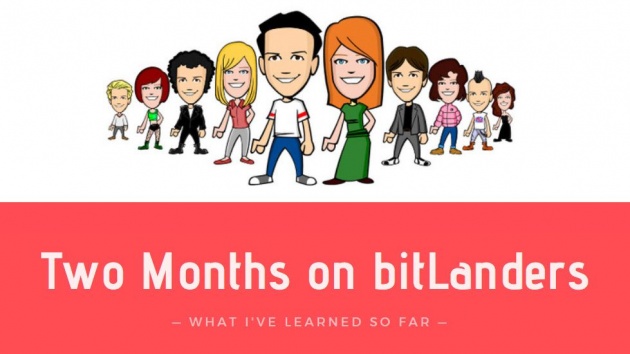 Image credits: Banner by Naotalba via bitLanders and Canva.com

I know two months isn't a lot, compared to those who've been here for a year or more. However, considering how I approached this website at first, reflecting on these first few weeks looked appropriate. And if my meagre experience can help someone else in turn, it'll be a good thing.

How I discovered bitLanders

I first heard about bitLanders as I was reading a book about cryptocurrency, The Age of Cryptocurrency: How Bitcoin and Digital Money Are Challenging the Global Economic Order. The introduction mentioned the Film Annex (actually, it dealt more specifically with the Women's Annex). I liked the idea of paying people in bitcoin, which in this case  helped provide some income to women in countries where they're not allowed a bank account except under supervision. And so, I was curious.

Their education is on the Women's Annex dime, but many students—more than six thousand of them—also earn incomes from content they provide to the for-profit Bitlanders. There, their work is judged, like that of every contributor, by editors and analyzed in terms of  how widely it is viewed and shared. These criteria form their "Buzz" score, which determines how much income  they can earn. Those earnings, as with every other Bitlanders'contributor's, are paid in bitcoin.

Of course, it's not called the Film Annex anymore now, and as far as I can see, it's stopped paying in bitcoins. Still, after having a look, I thought, 'Well, why not give it a try?' I like blogging, and if I can earn money doing so, it's a good thing. (I do have a couple of blogs of my own, but I don't like placing ad banners on them to get money, so I don't earn anything with those.) 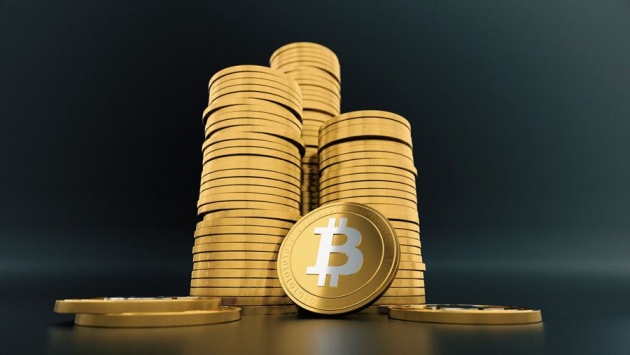 To be honest, in the very beginning, I wasn't convinced. The first 1.000.000 bitMiles/£1 was sweet, yet it felt like I wouldn't see any gains for a long, long time.

(Actually, my first impression was: 'How do I get rid of those pyjamas?' I assume I'm not the only one who's thought that.) 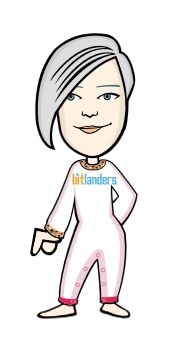 Image credits: The Pyjamas of Doom via bitLanders

Not really knowing what to do, I started browsing around, and I was lucky enough to stumble upon a couple of blog entries by people from the Leaderboard, namely @jean-beltran and @sharon-lopez. The way they blogged, as well as the advice they provided (I've been using Canva.com since I read Sharon's blog about it), let me see that maybe, if I played my cards well, I could get more than I thought out of bitLanders. Not to mention that I liked reading their blogs, all that simply. 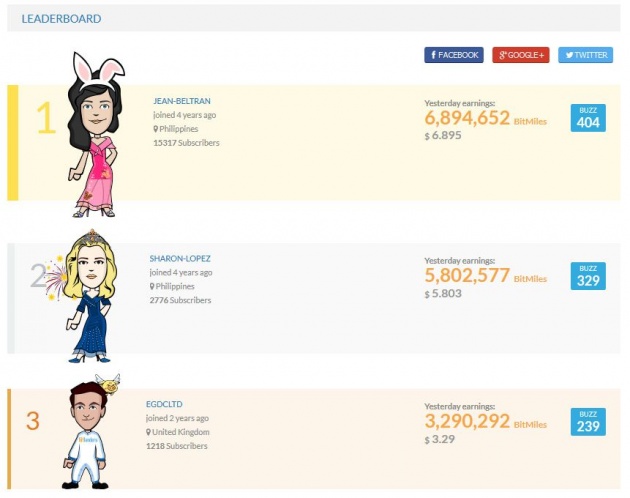 Reading the FAQ and blogs

So, I went through both the FAQ and a few more 'advice blogs', and read up more about Buzz and the reviewing process.

That's when I was glad I didn't spend my 30 gems on clothes, because those turned out to be very useful when it came to writing my first 3 blogs. I was able to make full use of them, and even though my very first blog post, That Elusive Slumber, only got 2 stars, advice I gleaned from the aforementioned Leaderboard bloggers helped me understand what I was doing wrong.

Thanks to this, it hit me early on that to earn money on bitLanders, you need to blog. Or post videos, too, but I'm not a moviemaker, and whatever I post in that regard won't deserve being submitted for review. Therefore I knew that I had to put some effort into blogging.

Here's how I approached it:

1. I created accounts on Canva and Pixabay in order to make proper-looking blog titles and get pictures whose credits I could easily list. 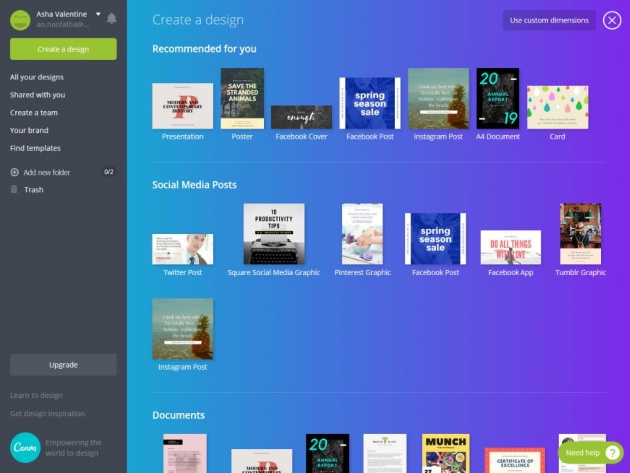 2. I wrote my first blog entry, perhaps too quickly. It got a meager 2 stars, which could have been worse, but definitely wasn't great. After that, I paid more attention to Hillary's advice. I also double-checked several 4- and 5-star blogs, to see what their authors were doing better. This is when I noticed they included the maximum number of pictures and videos.

3. Following this, I always went to include 10 pictures and 2 videos in each blog entry, otherwise I knew I wouldn't be rated well on presentation.

4. I tried spacing my writing better. I started using more titles in my posts, as well as bullet lists and quotes, and I focused on inserting pictures and videos at regular intervals between paragraphs to avoid walls of text. 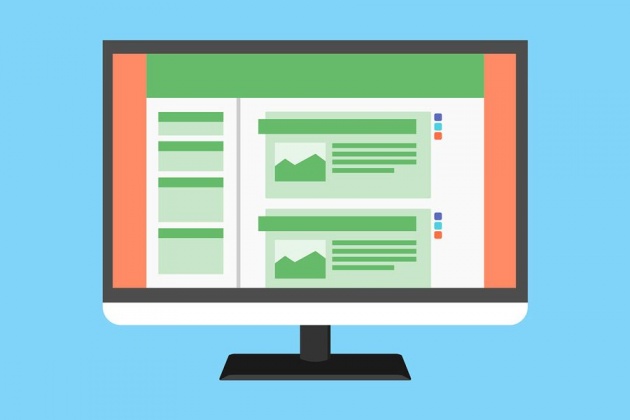 5. I installed the Grammarly plugin in my browser. I'm fluent in English, but proofreading never hurts!

6. I didn't spend any gems on clothing at first. I had to endure my pyjamas for a little longer, but there are worse things in life. This allowed me to use my first gems solely for blogging. Later, when I started earning from my blog posts, I bought a 2-gem saree, then got some of the free items available, like shoes and the spear. Now my avatar finally looks better.

7. More recently, I've installed the Yoast SEO plugin on one of my blogs, and now use it to draft my blog entries there first. This helps me make sure that the language I use remains simple. If I don't do that, I write long sentences all the time. 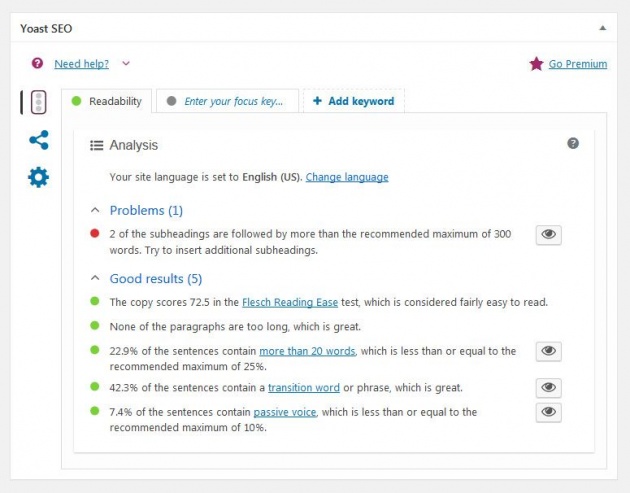 Image credits: How Yoast SEO can help you, by Naotalba

8. Last but not least, I've been completing the daily tasks, and logging in every day, usually after receiving the daily e-mail notification. This way, I always get the +7 Buzz daily bonus.

While I don't get the metrics behind the Buzz system, I realised early on that it would only work if it was reciprocal. I never ask people to buzz my posts (it's forbidden anyway), but I do my best to comment and buzz videos and blogs whenever I can, as well as share links on Twitter and Google Plus. Unless I've completely misunderstood, this contributes to everyone's buzz, my own included.

In these past two months, I've already seen results, and this is great.

After my first couple of weeks here, I was pleasantly surprised to see that I was actually earning money, and not just the 0.0001 cent/day I had been cynically expecting. I went my way up to $1/day, then $2/day, and found myself in the top 30. I've never reached the top (or barely, just once, when buying the tiara briefly put me in 3rd place), but I'm now consistently hovering between the 7th and 15th place.

Of course,  not everything is perfect:

1. I'm still bad at tags. I'm not sure I'll ever get the hang of it, or at least, not enough to consistently use the best tags possible.

2. I'm awful at recruiting and sharing my referral link. Nothing new here, I just don't like advertising in general. I've mentioned bitLanders a few times on social media, but I don't see myself posting my link every few days. So this probably won't improve much in the future.

3. While I like writing, I don't always have blog ideas. However, I discovered I liked writing about the places I visit—and being in London means I don't lack such places! Besides, it encourages me to visit my own city and not stay cooped up at home. Win-win here! 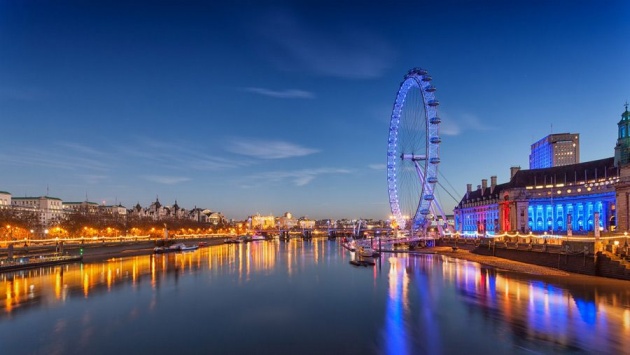 Image credits: The London Eye by Free-Photos via Pixabay.com

4. To keep my current earnings, I have to blog twice per week, and that's a minimum. However, I work full-time and study part-time, and I don't see this changing in the next few years. I don't think I'd be able to blog every day of the week without sacrificing my studying time, though. I have to work with this contingency, and hope for the best.

It takes hours and days to finally finish the perfect blog. Why? Oh because you have to edit and edit and research and all that. It takes work people! I was once a perfectionist but not anymore; don't be like that or you won't get anything done in time. Just work at it, polish it as best you can, submit to review (more than 1 blog) for several days and be #1 on Bitlanders too one day!

I'm not an expert on making video blogs or vlogs yet, nor am I serious with photography so I just do what I do best: I blog. WRITE ♥ RESEARCH ♥ EDIT ♥ SUBMIT ♥ REPEAT.

I can't end this post without mentioning the tiara for the Philippines' Independence Day.

I had been travelling for a couple of weeks, and since my blogging and buzzing rhythm had decreased during that time, so had my earnings. The tiara would be a sweet item to have then. However, when it was made available around June 12, I found myself in a bit of a quandary: I had just cashed in my first earnings, and didn't have enough to get 500 gems... but the payment hadn't reached my Paypal yet. 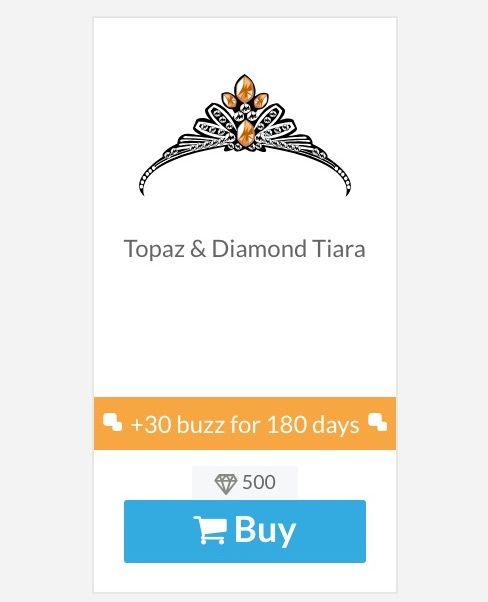 Image credits: The tiara, via Micky's post on bitLanders

Now, I had decided since day 1 that I would only reinvest my earnings into bitLanders, not spend extra money. Yet when I calculated how much the tiara would bring me, I saw that this would generate enough Buzz to tide me over well until after I could blog again, and to keep my earnings up to something between $1 and $2 per day. Once I'd be there again, it would repay quickly enough whatever I'd have to spend.

So, I broke my own rule for once, bought a big box of gems, and got the tiara. It was a good investment, because right now, I'm back to enough earnings to repay it. I don't regret this purchase. 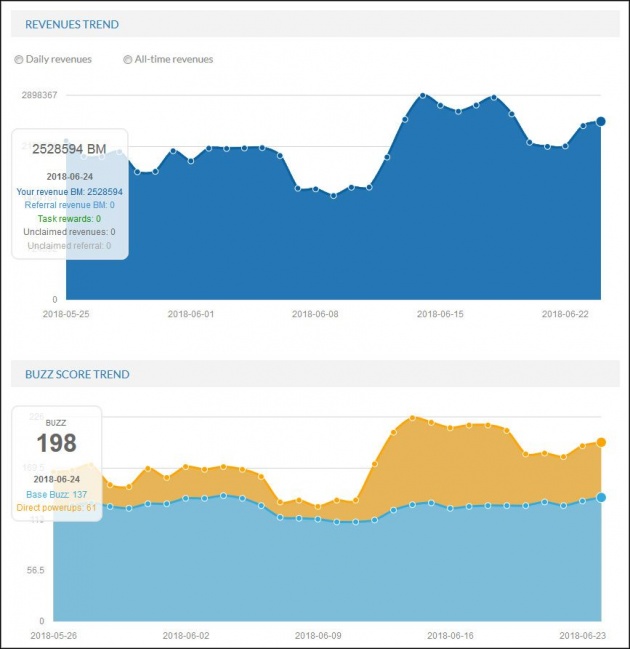 bitLanders won't replace my day job (not with the cost of living in the UK, for sure). This said, after having tried other 'blog for money' systems over the years, it's the best I've found, ensuring consistent earnings thanks to also taking into account your previous posts in the base Buzz score.

Besides, it's fun, it taught me how to write better blog posts, and I've discovered interesting blogs and bloggers here, too!