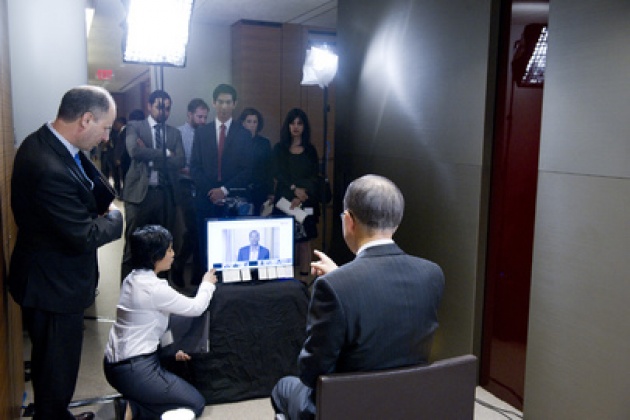 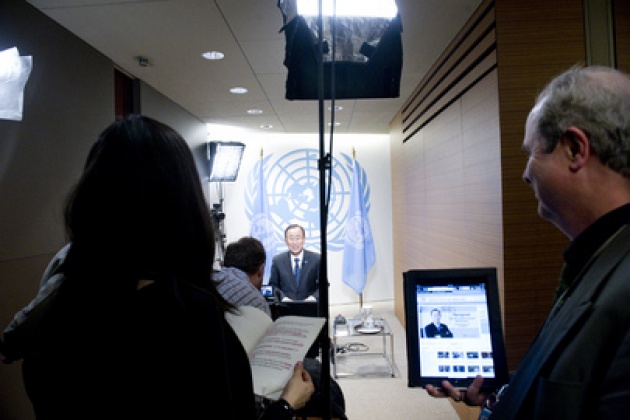 Doing his first ever Google+ Hangout UNSG with 6 young people from Asia, Africa, Latin America, Europe and the United States, who were selected to take part in consultation with partners in civil society and academia, offered “I make it a point not just to listen to ambassadors and presidents. I get so much out of listening to people like you. That is why I want to hear your ideas.”

Nick D’Aloisio, a young entrepreneur from the United Kingdom, asked Mr. Ban about what the UN is doing to support education systems and technology entrepreneurship across the world. The UNSG answered “Education is critical, but that education has to lead somewhere. Too many people leave school without the skills that the job market needs. We need to make sure education provides young people with 21st century skills.”

The UNSG also addressed issues of women’s health, (including maternity and HIV),  and getting young people more directly involved with the UN. “I am also committed to bringing youth to the United Nations. Last year, I participated in the first-ever Security Council meeting with youth. I am also going to appoint a Special Advisor on Youth…Young people are transforming our world here and now. Look at the Arab Spring. Around the world youth are standing up for what they believe. When I was in my twenties, I also participated in political protests to demand democracy. The difference is today, a movement can go global in a matter of seconds.”

The Secretary-General also invited young people to take part in global initiatives such as the UN Conference on Sustainable Development (Rio+20), which will be held in Brazil in June, and the Youth Employment Forum at the end of May in Geneva, which is organized by the International Labour Organization (ILO).

The 45-minute conversation was hosted by Google’s Senior Vice President, David C. Drummond, and was webcast live on the UN’s YouTube channel. The event was a partnership between Google, the UN Department of Public Information (DPI) and the UN Alliance of Civilizations (UNAOC).