Walking Into the Future: What's Next for the Modeling Industry.

The panel for the event was a who's who in the field of modeling and fashion including the following; Valerie Boster - bookings editor at American Vogue, Nian Fish - Chair of the CFDA Health Initiative, Colleen Furman - Co-Founder of Studio One Up, Joey Grill - Co-Founder of CLICK Model Management, Brice Lucas - Co-founder of Studio One Up, Mark Perlin - Financial Consultant, Crystal Renn - Model and Author, Wayne Sterling - Co-Founder of Mix Model Management, Evan Stone - General Counsel at Wilhelmina International, Roman Young - Director of the Women/Image division at Wilhelmina Models and Sara Ziff - Director of The Model Alliance.

Collectively the forum brought a wealth of experience and information for the audience to consider covering touchy subjects like underage modeling, eating disorders, photo copyrights and modeling industry projections. I've learned a lesson to bring a small recorder for the next event but I will try to synopsise the important points below from most of the panelists.

The first question, how has the modeling industry changed in the last 5 years was directed to Joey Grill, Click founder and entrepreneur whose resume of other successful businesses was very impressive and inspiring. Some of his thoughts were that modeling agencies have gotten bigger allowing for potentially more M&A deals, the smaller firms are finding it difficult to compete and new firms face barriers to entry due to the high expense of conducting business in NYC. Agencies have taken their business to other more cost effective cities as it's not absolutely essential to do business here as it has been in the past.

The bulk of the conversation was directed towards issues concerning models rights and new intitiatives panelists have adopted to protect models. Sara Ziff and Crystal Renn certainly took charge here. Both successful models, Sara is the founder of Models Alliance, I believe their passion to protect their fellow models was paramount in their discussion. Crystal brought up some great points about how the fashion industry can create dramatic change by having a middle sample size. Now it seems as sizes 0/2 and 16 are what a model will face at fittings. Crystal reinforced that women have differnet body types and they should be catered to as "happy and confident women shop".

I have been exposed to Sara and The Model Alliance and their focus to address problems in the modeling industry including a lack of union representation, underage modeling, financial transperency, eating disorders to name but a few. Nian Fish and Valerie Boster discussed both of their organizations refusal to now use models under the age of 16 for fashion shoots or on the runway. The goal is to get the designers, agents, and producers on board and take ownership of this at their level and not "blame" someone else in the loop for failing at keeping their word. Many of the panelists discussed that at the moment there is little retribution to using underage models and some sort of discipline should be in place. Unionizing would be a tremendous and logical step for the modeling industry to embrace. How that has not happened yet is a mystery but Sara's engagement of Actors Equity and AGMA are a step in the right direction.

Panelists also discussed social media and the importance of models to monitor and leverage their brand in the online world. It is of utmost importance to be consistent and thoughtful in the dialogogue between the model and the audience. Roman Young who represents Coco Rocha used her as an example of an immensely successful model who revived her career with a thoughtful and "authentic conversation" using social media to build a tremendous audience of loyal followers and hence loyal brands.

So what's your definition of a supermodel? I go back to the days of first name legends like Cindy, Christy, Naomi, and Linda basically as Nian says the models who "everyone knows that persons name". According to Crystal a supermodel is "someone who wears a garment and makes it come alive". Evan Stone says this woman can use their leverage in the industry to set their rates, similarly Wayne from Mix says she "can set terms and conditions".

Last but not least the handout hand some very interesting reading. I would suggest this article by Ben Schott for the NY Times that gives a fantastic descritption of the ins and outs of fashion week, 'A Fashion Week Miscellany'.

Thank you to Susan, Ali, Grace and all the students on hand to make this such a successful event. 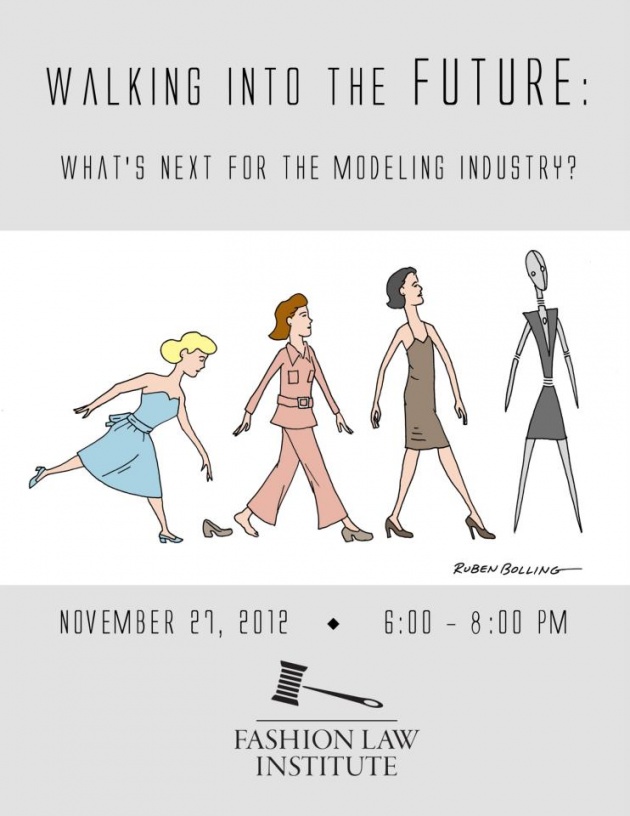