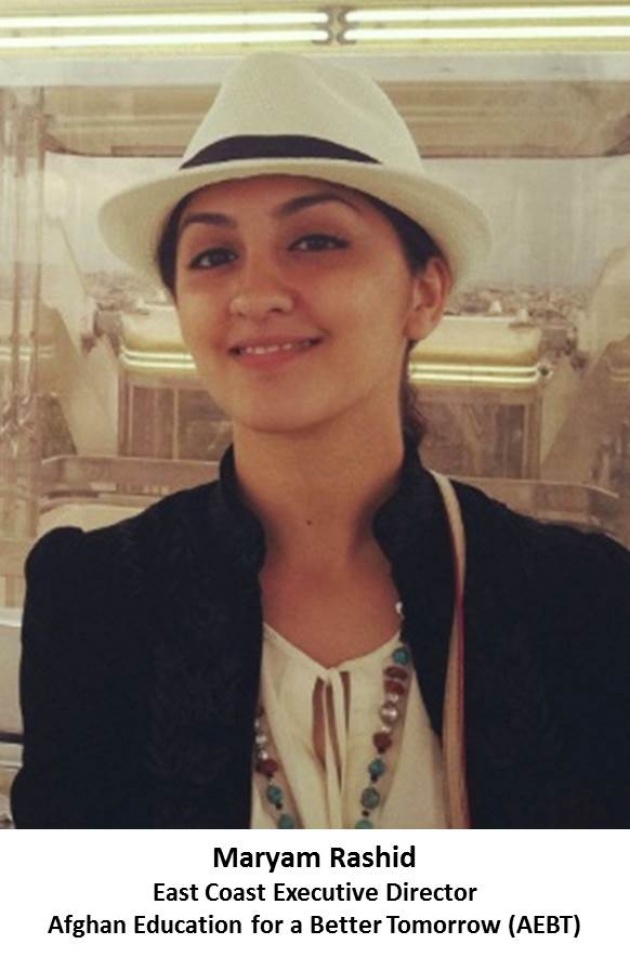 As Labor Day is celebrated in the United States this weekend, Afghans and Afghan-Americans in the Washington, D.C. area are contributing a major event to the holiday mix.

The all-day event is the Fourth Annual Afghan Arts and Culture Festival.  This year's Festival will be held from 11:30AM to 7:30PM this Sunday, September 1, in the heart of Washington’s famed National Mall.  Admission is free.  People from all cultural traditions are welcome, reflecting Afghanistan's world-renowned hospitality toward guests of any nationality.

This year’s event promises to be the biggest ever.  It is organized and hosted by Afghan Education for a Better Tomorrow (AEBT), a registered nonprofit organization operating nationwide in the United States.  AEBT is committed to supporting health and education sectors in Afghanistan with fundraising and other charitable initiatives.  All its members are volunteers. 100% of AEBT fundraising goes directly to support Afghan education and health care in Afghanistan.

Numerous dignitaries are expected to attend, including some local Washington elected officials. Many others have sent greetings and best wishes for the event.  Ambassador Said Tayeb Jawad, former Afghan Ambassador to the United States, says that the Afghan Arts and Culture Festival “will be an opportunity to meet with other Afghans, and friends of Afghanistan, to pursue our shared goal of a peaceful, prosperous, and vibrant Afghanistan."

Maryam Rashid is the AEBT’s East Coast Executive Director and the organizer of this year’s Festival.  She speaks here in an exclusive Film Annex interview with Edward Zellem, author of Zarbul Masalha: 151 Afghan Dari Proverbs and the Afghan Proverbs Illustrated series.

Film Annex:  Maryam jaan, it’s a pleasure to speak with you.  Please tell us a little about yourself and how you became involved with the Festival.

Maryam Rashid: It’s great to speak with you too, Dagarwaal Zellem. دگروال  زالم  And it is a great privilege to serve as the East Coast Executive Director of Afghan Education for a Better Tomorrow (AEBT), the host and organizer of the Afghan Arts and Cultural Festival to be held September 1 on the National Mall.

I’ve always been very interested and curious about my Afghan heritage, and I feel a special urgency to give back to Afghanistan because I have been afforded with so many opportunities here in the United States.

You can blame my passion for helping Afghanistan on a cultural identity crisis I had a few years ago. That encouraged me to learn more about my culture, and also to support Afghan youth here in the Washington, D.C. area to learn more about their heritage and culture too. 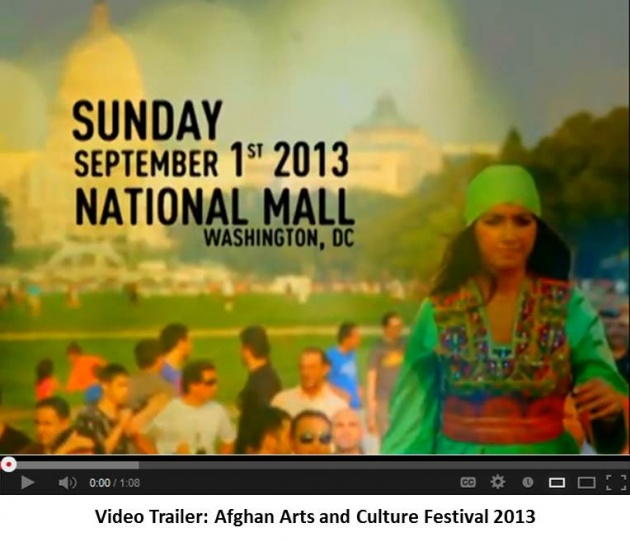 FA:  Please tell us more about the Festival.  How did you get the idea for it?

MR:  I came up with the idea of having an Afghan Festival back in 2010. I wanted to have a fundraiser and event that would be educational for the community, and one that would bring together different generations to share and appreciate Afghaniatan’s art.

The Festival is a free, all-ages event designed to help create a platform for cultural exchange and an embracement of ethnic and cultural diversity. It also aims to increase advocacy and active participation within the Washington, D.C. metropolitan area for the rebuilding effort in Afghanistan. 100% of the funds raised from the Afghan Arts and Cultural Festival will benefit AEBT-sponsored education and health programs in Afghanistan. 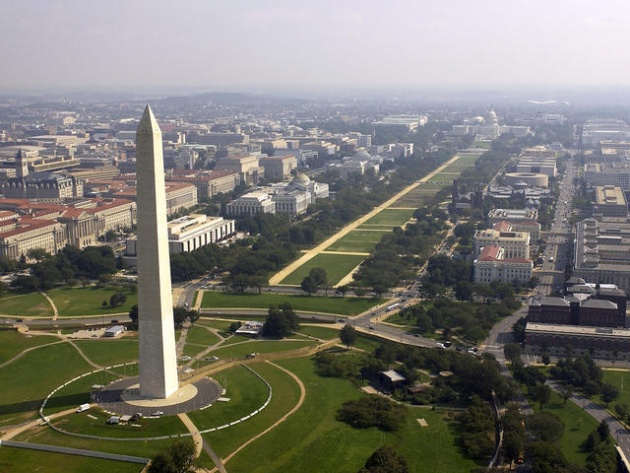 It’s great that we are able to have the Festival in the center of Washington’s National Mall.  For people who haven’t been there, the Mall is a lovely, giant park-like area surrounded by the Smithsonian Institution museums.  It is framed on one side by the Washington Monument and on the other side by the U.S. Capitol. It is a beautiful location and a very meaningful one too.

Afghans like to have fun wherever they are in the world, and we especially love family picnics (mey-la).  میله  So I like to also think of this as Washington’s biggest Afghan picnic of the year and surely one of the biggest in the United States too. But it will be much, much more than a picnic. 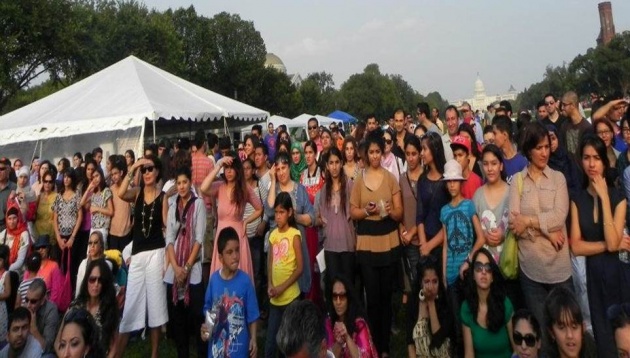 FA:  What events will take place at the Festival?

MR:  The Festival will include stage shows throughout the day, with a special guest appearance by cutting-edge rapper and humanitarian Immortal Technique, an Afghan musical performance by Fardeen Nawaz, dance and theatrical performances, an Afghan Fashion Show, and comedic performances by popular Afghan-American YouTube sensations Qias Omar and Harris Khattak. They're hilarious, and their YouTube video series is well worth watching. Afghans have a great sense of humor, even about themselves. 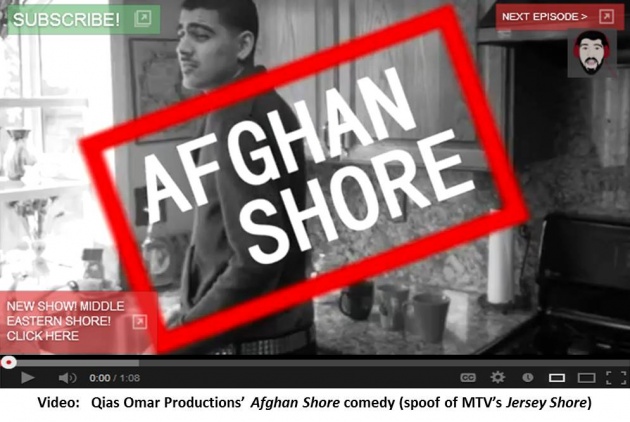 Also featured throughout the day will be poetry readings; Afghan Proverbs skits; presentations by several authors and book sales; an art exhibition featuring the works of local artists; Afghan jewelry and rug displays by Zamani Gallery and Antiques; and a history exhibition featuring an interactive timeline of Afghanistan’s rich history.

There will be kite-making and crafts workshops too.  For film fans, short-length documentaries and films will be screened continuously all day at the Festival’s Media and Film tent.  And of course, visitors can delight themselves with delicious Afghan food and free Afghan chai (tea) tasting throughout the daylong event.  It will be tremendous fun and very memorable for everyone. Afghans are famous worldwide for their hospitality to guests. 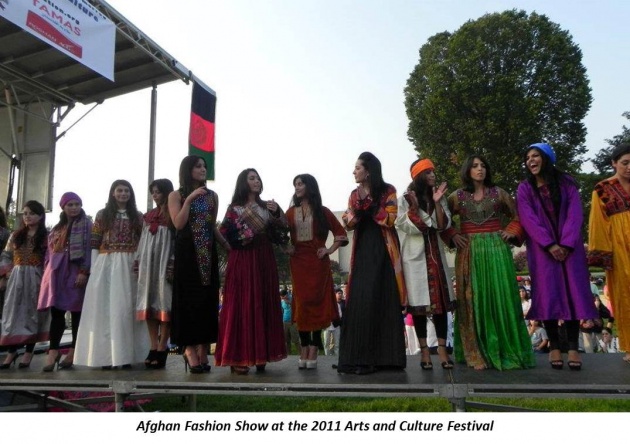 FA:  This event sounds like great fun, while at the same time it supports very important charities.  Please tell us more about how AEBT will support Afghan education and health with this event.

MR:  As we said earlier, Afghan Education for a Better Tomorrow (AEBT) is a  501(c)(3) nonprofit that is fully committed to supporting the education and health sectors in Afghanistan.  AEBT’s mission is to help create and build an education system to help prepare Afghan women, men, and children for a better tomorrow. AEBT also is developing programs to help ensure that the health needs and goals of Afghans are met.  We focus particularly on the needs of the most vulnerable people, specifically women and children. 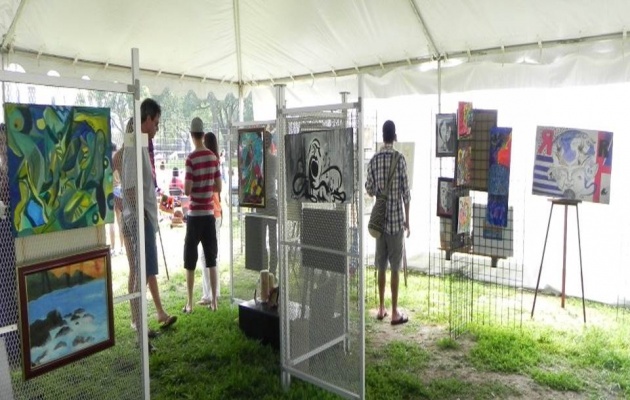 The founding members of AEBT believe that education and health care are the most basic, yet also the most important, cornerstones for Afghan society to survive and progress in the 21st century.  AEBT has no overhead cost. All members are volunteers and work for the benefit of Afghanistan. 100% of donations go to Afghanistan for education and health care. Some of our projects include the Herat Vocational School in western Afghanistan, which helps provide solar energy training, English as a Second Language courses, tailoring and seamstress courses, and child daycare.  We also partner with the Soholat Health Services and Vocational Organization for Afghans in Kabul, which provides midwife and computer literacy training.

Some sponsors of the festival include the Foundation for Afghanistan, the Ayenda Foundation, La Tulipe, and Worldwide Language Resources.

FA:  How can people find out more about the Afghan Arts and Culture Festival?

MS:  The best way for people in the Washington, D.C. area is to come to the Festival!  We will be impossible to miss on the National Mall on Sunday, September 1. The Festival will run from 11:30 AM to 7:30 PM.  Just look for the big stage and tents in the center of the Mall near 14th Street, the Smithsonian Metro stop, and the National Museum of American History. 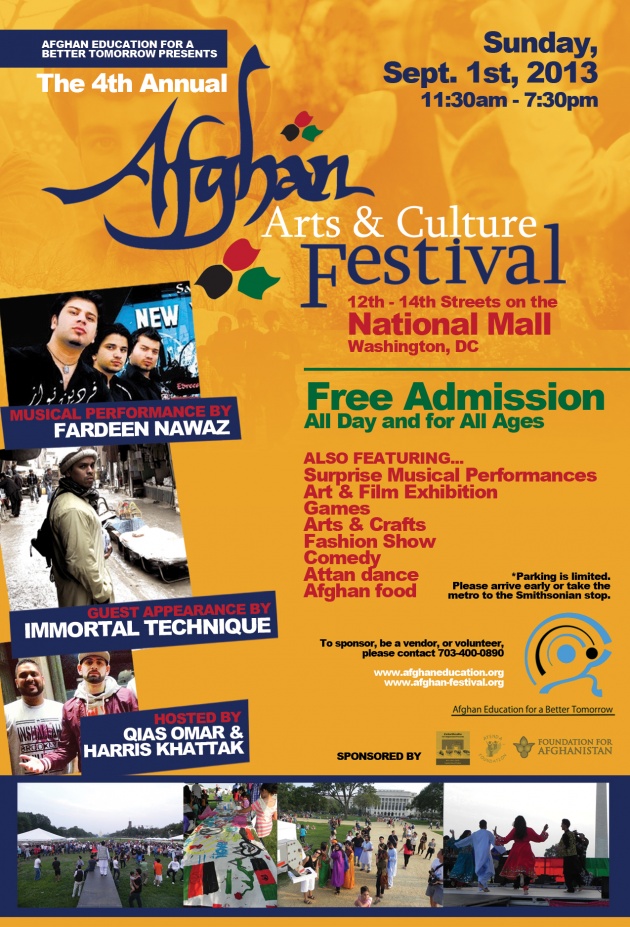 There is a lot of information and regular updates on our Facebook event page.   Twitter users can follow the very latest by following the hashtag #afghanfestival.  Even people who are too far away to join us can enjoy reading about the Afghan Arts and Culture Festival, even readers in Afghanistan!

After the event, we will post lots of photos on our Facebook event page.  I am sure that many friends who join us will post their photos and videos too. We also expect some media attention. 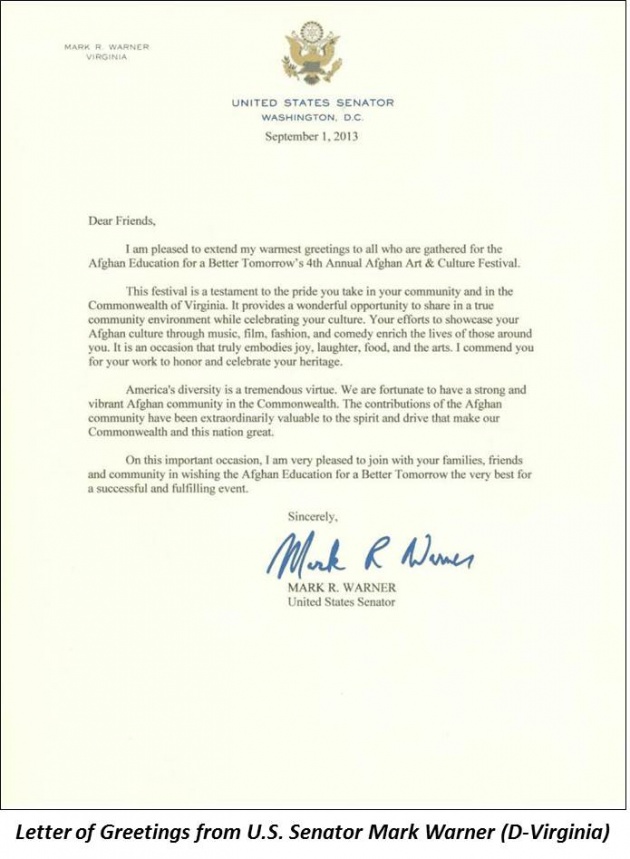 Finally, I want to thank the many great volunteers who supported the planning for this event with their time, talents and donations over many months. People have contributed from near and far.  It has been humbling and moving to see, and to be a part of. The planning effort has been far larger than any one of us alone, and the event itself will be too. As the Afghan Dari Proverb says, Ba yak gul, bahaar na-meysha. (One flower doesn't bring spring).  به یک گل، بهار نمی‏شه  It means that it takes many hands and much teamwork to achieve something big.

We hope you can join us at the Afghan Arts and Culture Festival this Sunday.  And no matter where you are, please remember to support Afghan education and health!  These are the keys to a brighter future for Afghans, and for everyone all over the world.