Neil Gaiman is one of my favorite authors. The man has an almost supernatural talent for writing fantasy and horror that are imbued with an originality few others can replicate. His works blend philosophy, mythology, meta-narratives on the elements of fiction, and a sense of genuine wonder. I re-read American Gods every year because it’s so masterfully crafted. I am a Gaiman fanboy, so I was very enthusiastic when I heard he was writing the script for a game. I couldn’t wait to see what his spark of mad genius would bring to the gaming world. Having now played Wayward Manor, I can only shake my head at how such a masterful storyteller could have been responsible for such an atrocious work.

Dozens of world mythologies have their own version of the genius loci, a spirit which inhabits a home and protects its residents. If treated well, the entities would perform kind gestures for the family dwelling within, but if treated poorly, they would not hesitate to punish the ungrateful humans. One such spirit has become part of Wayward Manor, a Neo-Gothic New England estate, and it is very upset with its current lodgers. The prestigious Budd family has let the house fall into disrepair as they pursue the indulgences of the Roaring Twenties. The manor wants them out, but with no way to act upon its frustrations it must silently suffer more abuse and neglect. By a stroke of luck, the chance for salvation arrives when young Polly Budd opens a chest that had rested in the attic for years. This seemingly innocuous act frees another spirit, one that can make its presence known. With the aid of the poltergeist, Wayward Manor sets in motion a plan to drive the Budds from its foundation and return to a peaceful state of abandonment.

The concept of a haunted house that turns out to be sentient isn’t a new idea, but it’s been approached in various ways over the past few decades. I assumed that Gaiman’s imagination would lead to a magical, slightly macabre interpretation of the premise. And yet that sense of enigmatic wonder never materializes. Everything is so mundane. The manor’s reason for wanting the Budds to leave never resonated with me. Yes, the family was annoying and haughty, but I never saw them doing any real damage to the house. The dialogue is lifeless, mostly consisting of prosaic insults towards the family and instructions on how to complete each level. According to the developer’s website, the original pitch for the game would have focused not on the house, but on the ghost in the chest learning more about his death and unseen dangers facing the family. This is a much more intriguing idea, and I honestly don’t know why The Odd Gentlemen abandoned it for something duller.

A significant issue I had with the narrative was the number of loose ends that are never resolved. Where did the ghost in the chest come from? How does it know the spirit of Wayward Manor? In the final chapter a new antagonist emerges to threaten the Budds, but his motivation is never discussed. I know that keeping some plot elements vague is crucial to building an engrossing mystery, but there needs to be some closure at the end to make sense of everything. I asked Gaiman if he could provide some clarity, to which he responded, “That’s another story for another day.” I was not satisfied with this answer. If he means to address these questions in a written work, it makes the game seem even more worthless because crucial lore was deemed unnecessary. Gaiman has fallen into the trap of not explaining certain elements of his work before, but this is usually easy to overlook because the fantastic brilliance was enough to keep me invested and overlook those issues. There’s nothing engaging in Wayward Manor, so the problem becomes more blatant.

Characters are non-entities. Every member of the Budd family is identified solely by a single quirky trait and a scarce few lines of dialogue that further carry across their eccentricities. Patience and Fortitude are obsessed with candy, Hubert loves playing pranks, Theophilus acts like a big game hunter, and the maid Dagmara takes an almost fanatical approach to cleaning. Their endlessly repeated one-liners become so irritating that the idea of tormenting them becomes more and more appealing as the game progresses. The only character who has any real presence is the spirit of Wayward Manor itself, voiced by Gaiman. While it is nice to hear him convey the house’s lamentations and resentment towards its inhabitants in his dry, sardonic tone, no effort is made to make his performance memorable. There’s no vibrancy, no staying power like the narrators Puppeteer or The Stanley Parable possessed. This is possibly because his speaking roles were limited to the start and end of each chapter, so there wasn’t enough time to establish the role. As limited as Gaiman’s narration is, it’s the only redeeming quality of the game.

One of the most significant issues hindering The Odd Gentlemen’s work is that their games aren’t very original. Flea Symphony was a standard physics puzzle game in the vein of The Incredible Machine that just replaced mechanical equipment with musical instruments, while The Misadventures of P.B. Winterbottom took concepts from Braid (reversing time) and The Company of Myself (creating clones to solve puzzles) yet failed to use these mechanics in any novel ways. Similarly, Wayward Manor borrows heavily from Ghost Master and the more obscure Sega Genesis/Mega Drive title Haunting. The ultimate goal is to scare the Budd family out of the manor by manipulating different objects to create scenarios that will frighten them out of each room in the estate. Players are first limited to only a few items per room, unlocking more with each successive scare. Ideally this would result in constantly evolving emergent gameplay that offers players a variety of options on how to reach their goal. But like everything else in the game, the core idea was seriously flawed in execution. 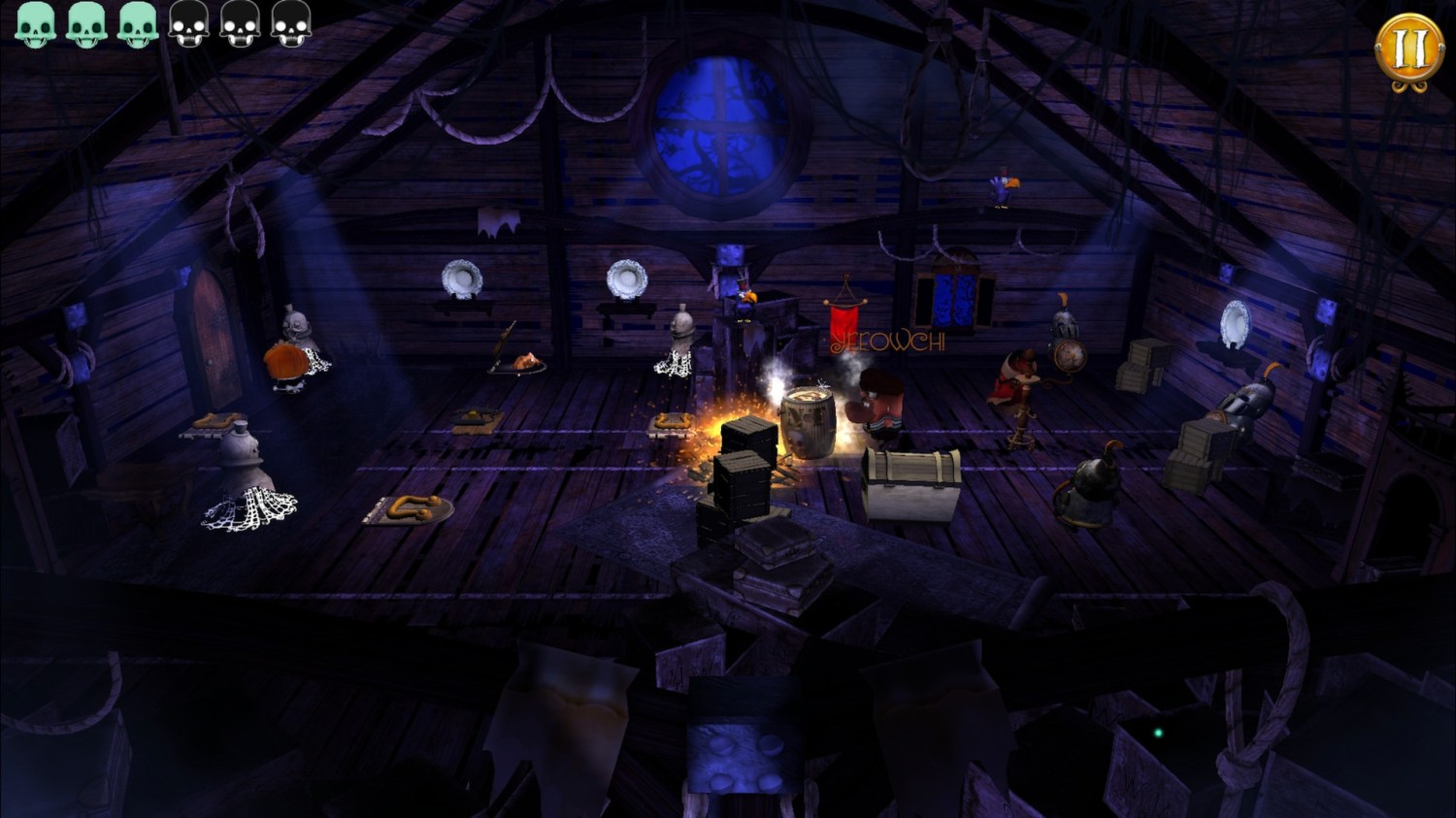 Wayward Manor commits the greatest blunder a point-and-click game is capable of – unresponsive object interactions. There were numerous instances where I tried to click on something to spring a trap only to see it fail to move. In the worst cases I’d have to click at least six or seven times before it finally triggered a reaction, only to then have the setup ruined because my target had moved away. What can make this even more frustrating is the erratic movement patterns of the Budds, which frequently results in them only occupying the spot to strike for less than a second. If the trap fails to register the first time, players may need to keep luring out their victim repeatedly in the hopes that they’ll again wander into the right location to pull off the attack. Adding to this problem are the times when characters move yet the player is unable to act, forced to wait until they’ve done something before gameplay can resume. This game is built around accurately timed responses, yet it constantly sabotages efforts to get the timing down.

Delayed reactions and failed trap activations ultimately lead to another significant problem. As new objects to interact with became available, I naturally wanted to experiment with them to see what chaos I could unleash. This was a huge mistake because, even though the game never tells you, some items can only be used once in a certain room. Gunpowder barrels explode after activation, while potential obstacles that can be moved by the wind or animated suits of armor can end up pushed into a recess where they can’t be accessed again. In looking for the most creative trap scenarios, I ended up wasting the tools simply because I wanted to see how they’d work. When this happens, the levels can usually only be completed by repeating the more mundane scares like hitting the Budds with liquor bottles, or if there aren’t enough objects left to get all the necessary scares, starting the level over again and hoping that this time the randomness won’t be detrimental. Once again, any potential fun is ruined because of poor design choices. 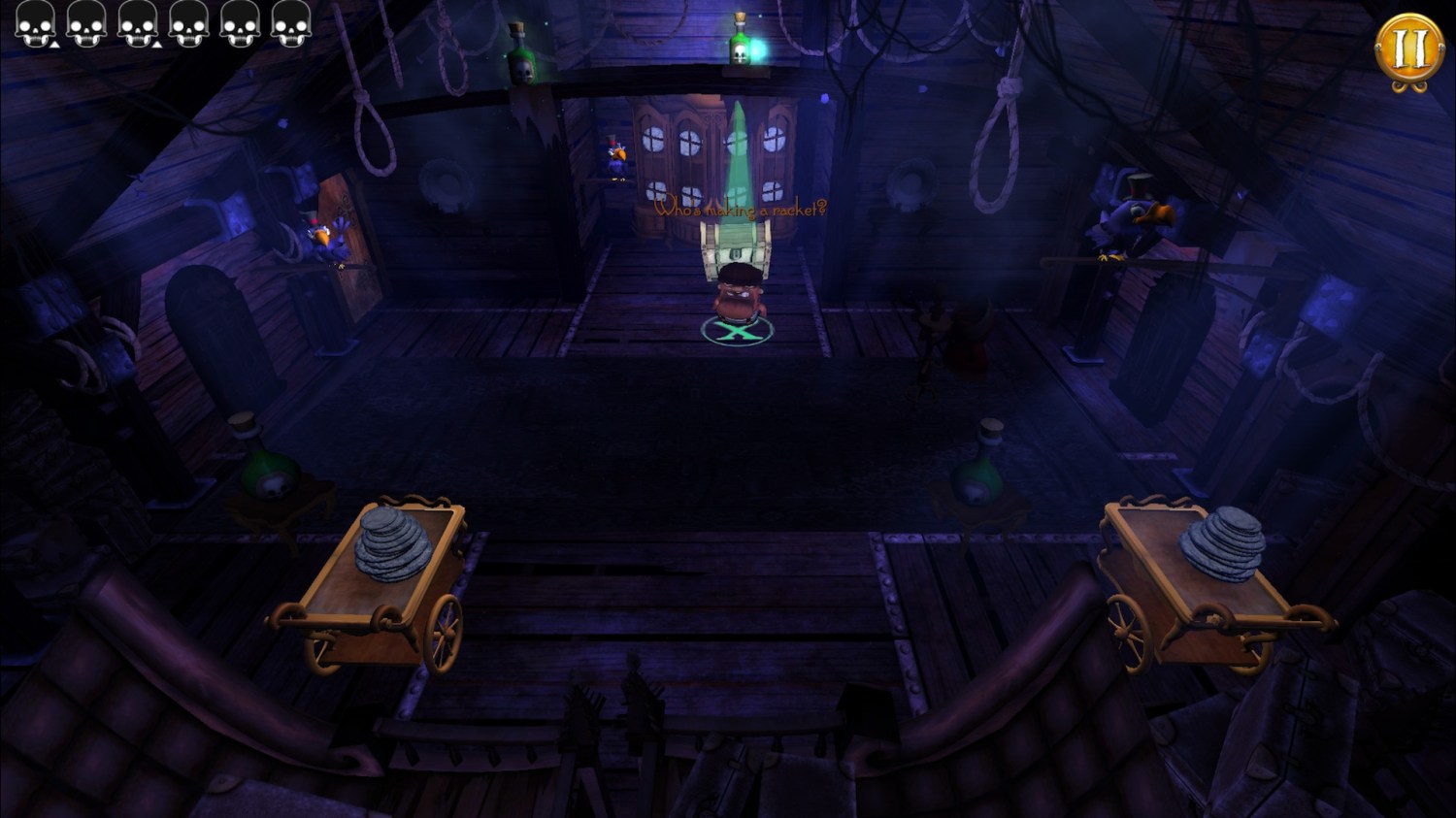 There were a few efforts to make gameplay more interesting. Each member of the Budd household has their own quirk which can be used to lure them into specific traps: Mildred throws a fit if her dresses get dirty, Herkimer loses all inhibition when he drinks, and Theophilus is afraid of the dark. Again though, this frequently leads to repetition as the same tactics tend to be used over and over without variation. Levels with Polly can be completed by making her happy since the spirit of the manor has no ill will towards her, but they aren’t necessary and can be ignored altogether to rely on simple scares. If there were stages where players could only progress by finding new ways to cheer up Polly, it would add some welcome variety. Each level has “Secret Scares”, achievements unlocked by fulfilling certain criteria. The conditions are revealed at the end of the level, ideally to encourage replaying it to obtain all of them, yet I doubt players will want to repeat any of the annoyances they endured the first time around. The final chapter offered an interesting twist where players have to help the Budds escape traps, but once more these just involve setting up items that have been used before to play on each of their individual weaknesses. I assume the developers intended this as a final challenge for players to show how they’d mastered each of the various traps, but after slogging through them for the past four chapters I’d had enough. 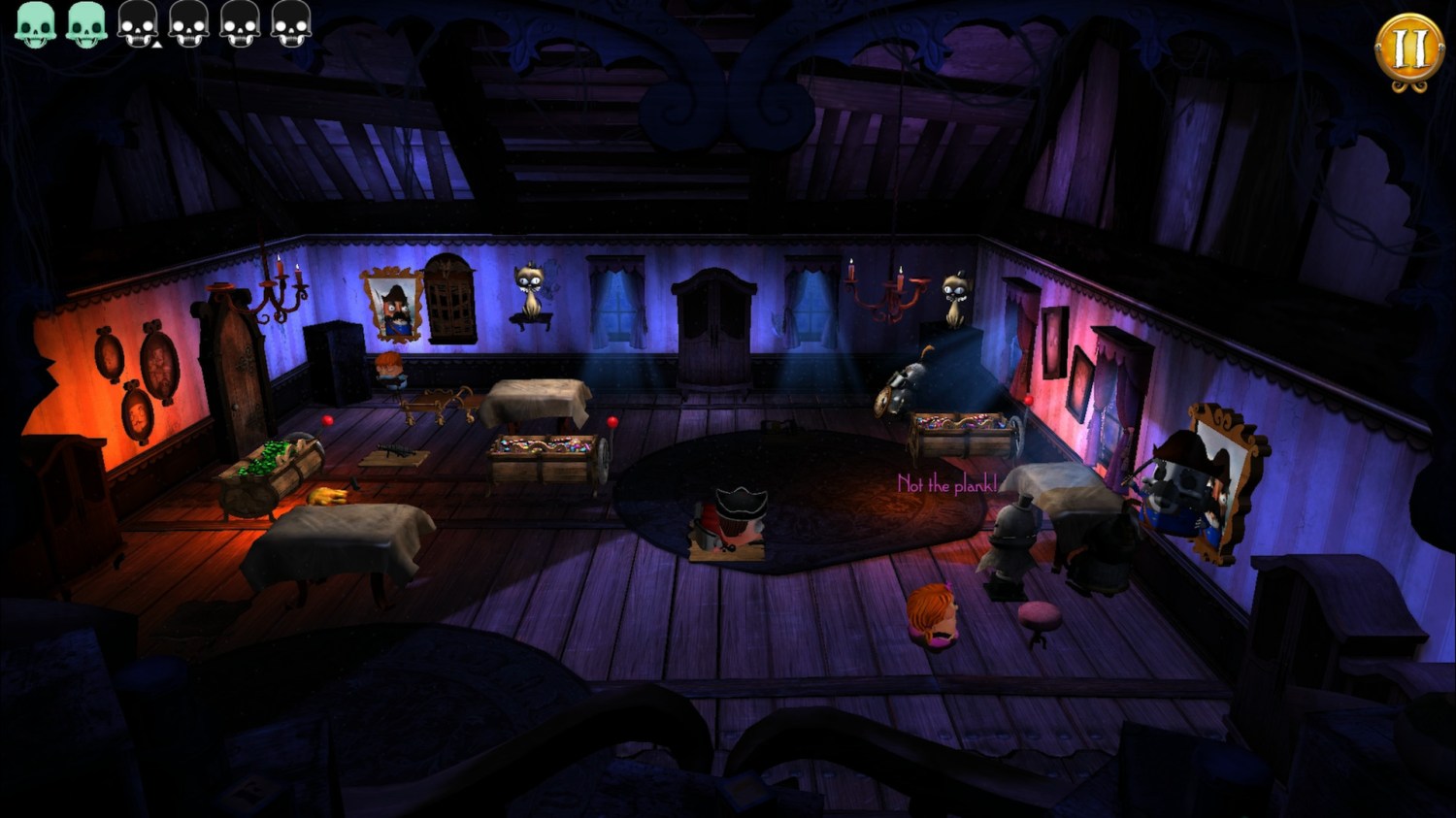 Visuals are absolutely atrocious. Every model is blocky with limited to no texture. Each character is designed with bug eyes, disproportionately small limbs, stocky bodies, and faces that take up the entire upper halves of their torsos. Almost every room is recycled from a previous level, with the only changes being the layout of objects and a different color palette. I absolutely hated the music. Whoever composed it made a series of short discordant jazz pieces, presumably to fit the “eerie” tone of the game, but the lack of harmony made it unbelievably annoying. Adding to the problem were the grating sound effects. Everything from breaking glass to explosions were so loud and harsh, even with the volume near its lowest setting, that I found it more pleasant to play the game with the sound completely off. 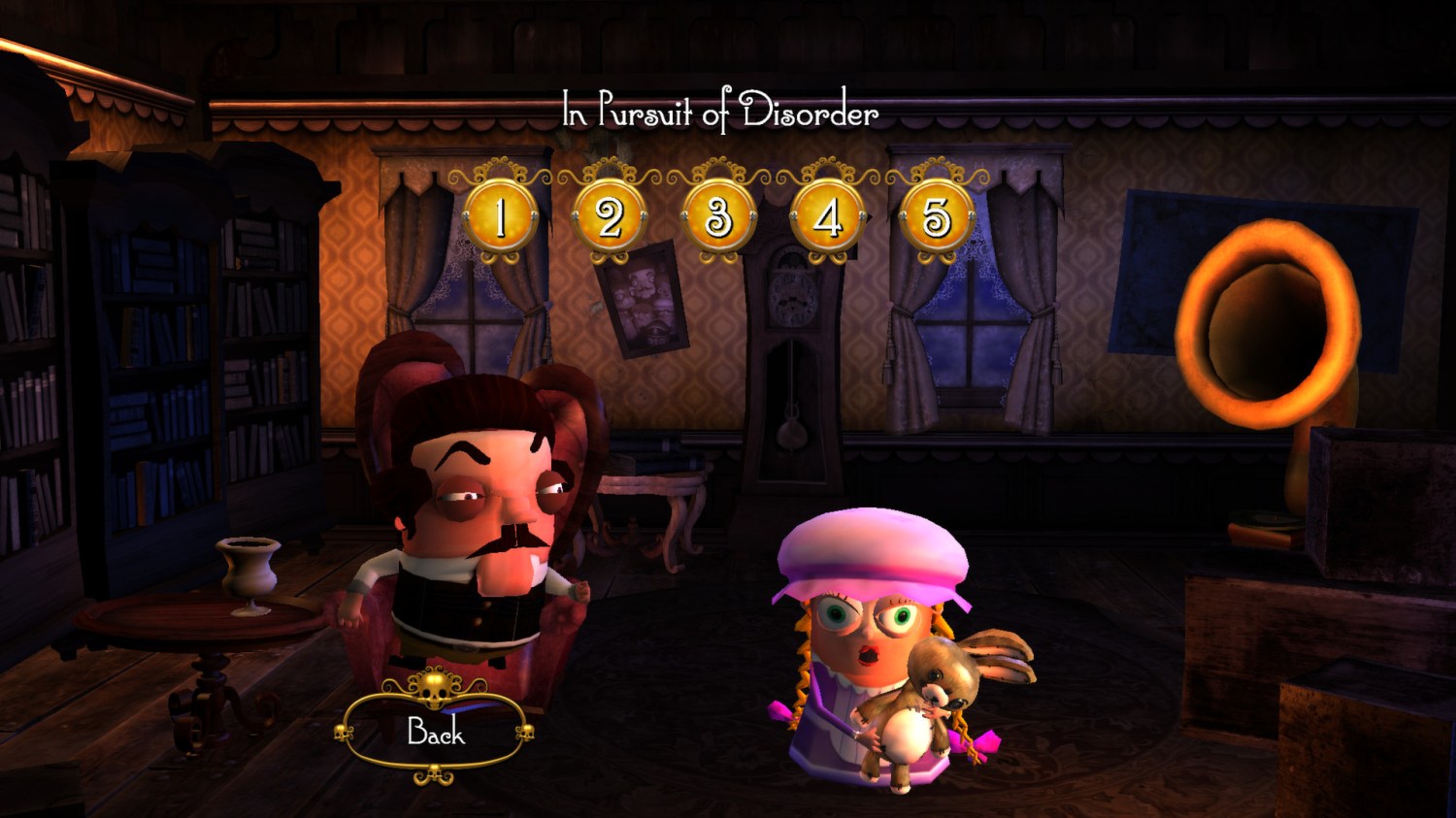 Wayward Manor may be the worst game I’ve played this year. If it was just another low-effort adventure game put out by a no-name indie developer, I’d be willing to simply forget about it. But this had one of the most creative minds in the literary world working on it, and it ended up as a scattered mess that was a chore to play. Maybe Gaiman just had difficulty translating his style to an interactive medium, or maybe he should have partnered with a more experienced studio. Either way, I expected better. This honestly feels like Gaiman and The Odd Gentlemen phoned it in without caring about the end result. 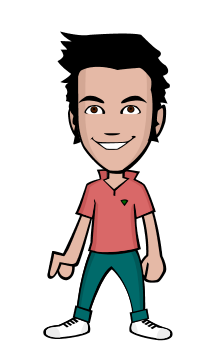 Best Video Games of All Times

Hello guys! Today I am here with the list of my favorite video games. All those games are very popul…

Image credits: Screenshot by Naotalba After Harry Potter: Hogwarts Mystery (which, by the way, has b…

Image credits: eBook reader by Aliis Sinisalu from Unsplash via Canva.com A couple of years ago, I s…

Watch Dogs 2 Video Credit: MrEdxwx Via YouTube I watch my two nephews, a ten-year-old and an eight-y…