First of all we are deeply grateful to Almighty Allah who with his grace gave us the opportunity to complete this task successfully.

We wish to express our heartiest gratitude and sincere most feelings and regards for our respectable supervisor Mr. NADEEM AHMAD Lecturer BIST College for his help, guidance and keen interest in the completion of this task. He always gave us courage and co-operated us at every moment.

We used various software for developing the Website. They are as under:

We have used Macromedia Flash MX for creating animations, Text styles, and my special banners.

Dream viewer is a powerful web development application. Interactive web pages can be created through this application. Most of the work has been done in this software. I use CSS and JavaScript in Dream viewer.

Detail Of My Web pages 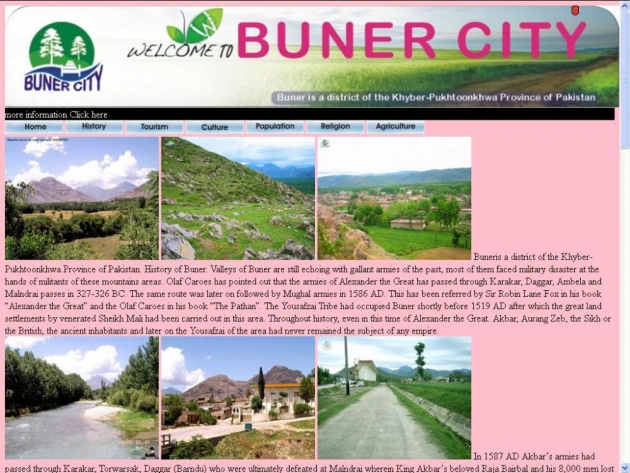 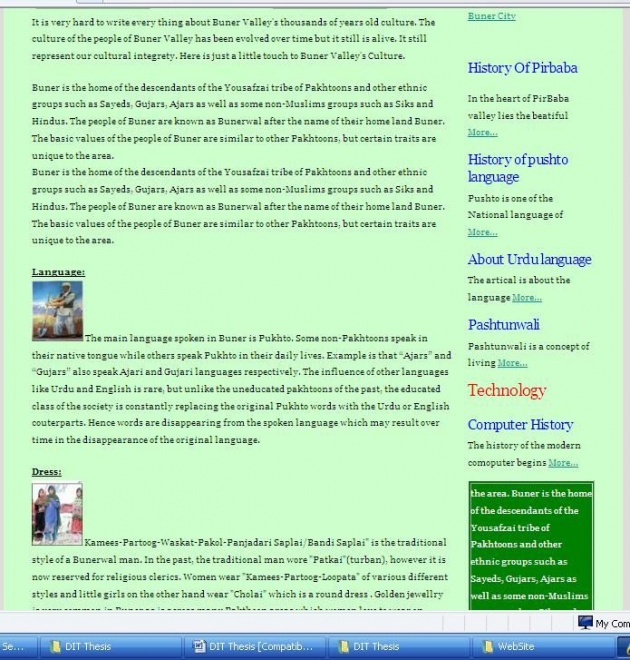 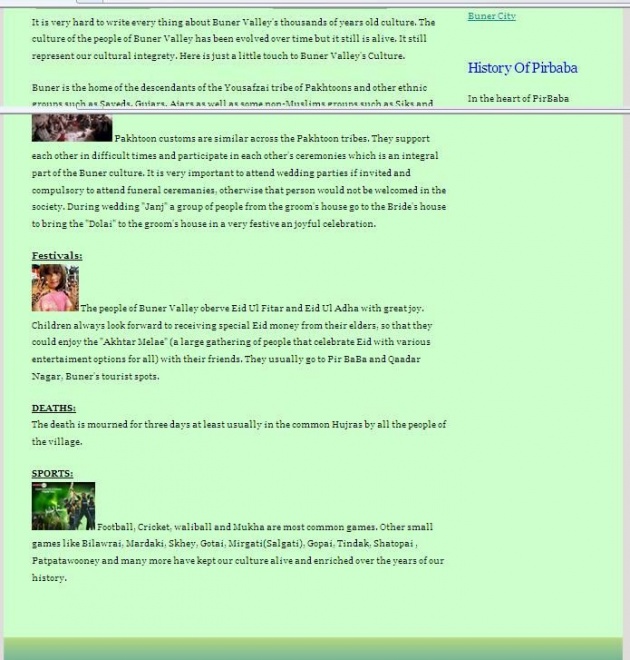 In the main page there are some useful paragraphs for the visitors to read that what is the buner valley, we included this page in the website to give detail of the Buner City.

The main language spoken in Buner is Pashto. Some non-Pakhtoons speak in their native tongue while others speak Pashto in their daily lives. Example is that “Ajars” and “Gujars” also speak Ajari and Gujari languages respectively. The influence of other languages like Urdu and English is rare, but unlike the uneducated pakhtoons of the past, the educated class of the society is constantly replacing the original Pashto words with the Urdu or English couterparts. Hence words are disappearing from the spoken language which may result over time in the disappearance of the original language.

Kamees-Partoog-Waskat-Pakol-Panjadari Saplai/Bandi Saplai" is the traditional style of a Bunerwal man. In the past, the traditional man wore "Patkai"(turban), however it is now reserved for religious clerics. Women wear "Kamees-Partoog-Loopata" of various different styles and little girls on the other hand wear "Cholai" which is a round dress . Golden jewellry is very common in Buner as is across many Pakthoon areas which women love to wear on different occasions.The Buner women wear Bolqa/Paroney (Buqra and Vail) when they are in public.

The people of Buner are mostly farmers and live on what they get from their fields and farms. Due to education, there have been huge advances in the type of profession of Bunerwals. A large number of the educated class is employed by the government. Another segment of the younger generation is employed abroad in countries like Malaysia, UAE, Saudi Arab, Qatar, Bronei, Kuwait, Bahrain, USA, Uk, Japan, Hong Kong etc.

Life style of an ordinary Bunerwal is simple. As the author of the Love Toknow 1911 Encyclopedia states about Bunerwal "Simple and austere in their habits, religious truthful in their ways, hospitable to all who seek shelter amongst them, free from secret assassinations, powerful and warlike tribe, they are bright example of the Pathan character at its best." Family system is the back bone of the society.

Islam is the religion of the people of Buner.

Text of my site

History of Buner. Valleys of Buner are still echoing with gallant armies of the past, most of them faced military disaster at the hands of militants of these mountains areas. Olaf Caroes has pointed out that the armies of Alexander the Great has passed through Karakar, Daggar, Ambela and Malndrai passes in 327-326 BC. The same route was later on followed by Mughal armies in 1586 AD. This has been referred by Sir Robin Lane Fox in his book “Alexander the Great” and the Olaf Caroes in his book “The Pathan”. The Yousafzai Tribe had occupied Buner shortly before 1519 AD after which the great land settlements by venerated Sheikh Mali had been carried out in this area. Throughout history, even in this time of Alexander the Great. Akbar, Aurang Zeb, the Sikh or the British, the ancient inhabitants and later on the Yousafzai of the area had never remained the subject of any empire.
In 1587 AD Akbar’s armies had passed through Karakar, Torwarsak, Daggar (Barndu) who were ultimately defeated at Malndrai wherein King Akbar’s beloved Raja Bairbal and his 8,000 men lost their lives.

Akbar could not get even the body of Raja Birbal to be burnt. During Sikhs rule over Frontier, they could never enter the area of Buner. This area became sanctuary and strong citadel for the Muslims fighters of Syed Ahmed Shaheed and his followers for about 130 years. The great Syeds of Sitana, Malka and Takhtaband loyally stood in support of those Mujahiddins against the Sikhs and the British. The people of Swat and Buner got united and formed state, under the rule of the great freedom fighters Syed Akbar Shah Sitana from 1849-1857. After his death in 1857(exactly on the same day the independence War of 1857 started), the area remained without a ruler till 1915 which period is known as “Era of Pukhtoo” where every tribe was ruled by its own elders.
The armies tried to reach Malka, a strong hold of Mujahiddin through Ambela in 1863 AD which resulted in the famous AMBELA WAR. The Raja shamefully failed to achieve the target. The British persuaded the Khans of Buner through Ajab Khan and Aziz Khan of Sudham, District Mardan to strike a deal, who went to British officers, burnt few houses and thus saved their prestige. The British, as per their own record had lost the largest number of British officers and soldiers in a single military expedition in India i.e. 238 dead and 670 injured. They could not establish their rule in Buner till independence in 1947.
The light of Islam had reached the area through Sufis and Ulamas much earlier but shortly after 1000 AD, the forces of Sultan Memood of Ghazna defeated the last Budha ruler Raja Geer under the command of “Pir Khushal” and the Yousafzai tribe started entering Buner and thus spread the religion of Islam. The arrival of Pir Baba (1502-1575 AD) accelerated the spread of Islam in the area.