I started the week by focusing on a series of blogs about filmmakers and social media. After reviewing how our filmmakers are using the Internet and especially social media, I prepared a blog that presents the different ways they use to promote their Web TV. I was impressed to see how well they get how Film Annex works and efficiently share their work. You can read the blog here. Then, I focused on one of our most active filmmakers, Amy Hill, to see how she, specifically, uses her social media networks as a film promotion tool. The blog comes with a short interview of her about the topic. I hope it gives examples to filmmakers and encourages new ones to join the platform. More individual blogs about each filmmaker will come in the next weeks.

On the same topic, I started to scout independent filmmakers who use social media well to show their work. I want to ask to interview them on the subject and invite them to join Film Annex.

We also launched a new social media platform whose popularity has been increasing lately. Film Annex is now on Instagram! Follow us (filmannex) for a corporate view of Film Annex and see our team at work, filming interviews, etc. 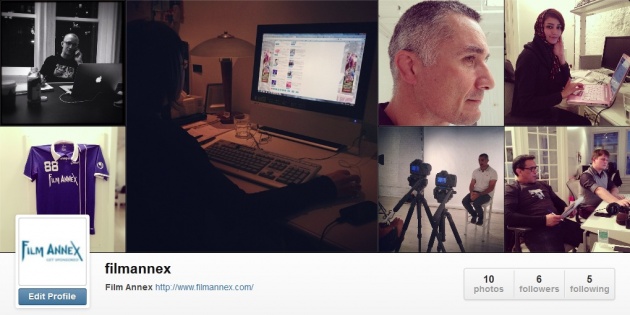 I did some more writing with a blog about our last video for JCI, an interview with Dr. Thomas Starzl, known as the Father of Modern Transplantation. Another one is about Roya Mahboob and her entrepreneurship efforts in Afghanistan.

This week was the first of December, so I also worked on the social media statistics of last month. Our LinkedIn page "won" in November in terms of new followers with a 40% increase, reaching 121 members at the end of the month. It goes with the efforts that we recently put on this specific network. I will also spend more time in the next weeks connecting with people working in social media, the entertainment industry, and also filmmakers. Now for the other social media platforms, as of today, our Facebook page has more than 215K fans and our Twitter counts 4,107 followers. 58 people follow us on Tumblr and 46 have already Google+1 our page.

Lastly, we received a lot of new content. It seems that we welcome a new filmmaker every week and this time, it's animator Jeff Chiba Stearns who is the newest member. He was referred to us by Jonathan Ng. His Web TV is already up and running and he's looking forward to starting promoting it and seeing the results. Jeff has an interesting cultural background as he grew up a mix of Japanese and Caucasian in a small Canadian city. Watch below one of his animated short film to get to know him better:

We also have new films by Ciaron Craig. I look forward to Not Easily Broken whose teaser was enough to pique my interest. Andy Salamonczyk sent us several new videos with deleted scenes and an interview of him. MadLab Productions is still all about zombies and their last short, Winter Zombie Time, comes right on time for the holidays. Lisa Stock started working on experimental films and explains it all in her blog, along with a new video.

That's all for this week!