What are the Different Types of Tea? 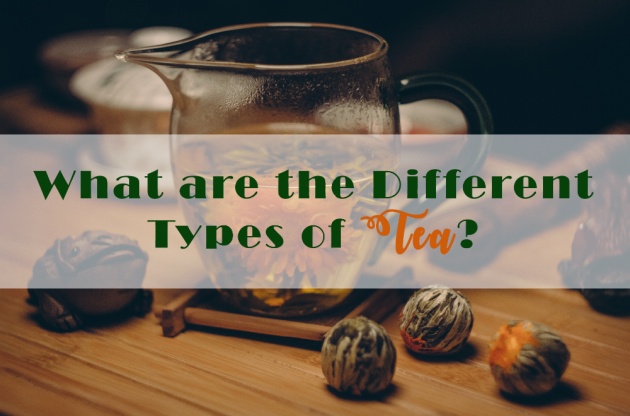 Tea has been both a fashionable and healthy drink for many years. But, is the tea you are drinking the right tea for you? Yes, there are several different types of tea and not all of them have the same effect and health benefits. You need to know exactly what you are drinking and how it affects your health. For example, did you know that black, green, oolong, and pu'erh tea all come from the same plant, Camellia sinensis? The difference between these different types of tea is how and where they were cultivated and processed. Herbal tea, on the other hand, is a whole lot of different category on its own. Let's go over the different type of tea, shall we? 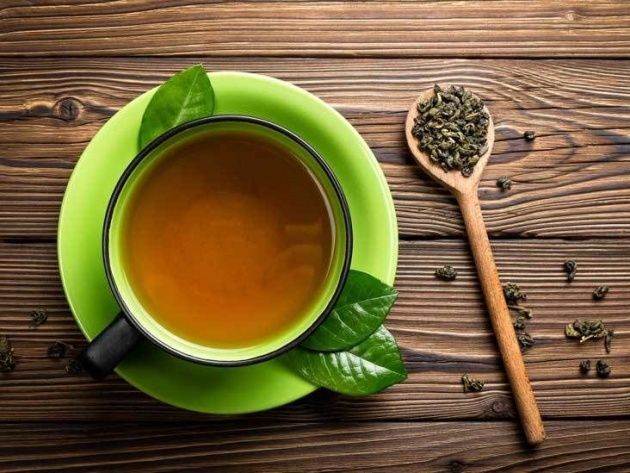 Green tea is quite popular mainly due to its supposed health benefits. In Japan and China, green tea is a staple of local cuisine. Green tea comes in different flavors--from sweet and mellow, like Long Jing, to grassy/vegetal and lemony, like Sencha. It is also not oxidized like black tea. Chinese green teas are usually processed using dry heat in an oven-like rotating drum or a cooking pan that is very similar to a wok. Examples of these are Long Jing and Bi Luo Chun. Japanese-style green teas, on the other hand, are typically steamed. Some examples of these are Gyokuro and Sencha.

The different processing techniques by the Chinese and Japanese produce different flavors and give the green tea its unique flavor.

Japanese green teas have a strong grassy, oceanic/seaweed, and vegetable-like taste. There is also slight citrus undertone to them. Chinese green teas also have a vegetal flavor to them, but they have a rather mellower and sweeter flavor. You may also notice a slight hint of nuts, wood, vanilla, and/or flower. 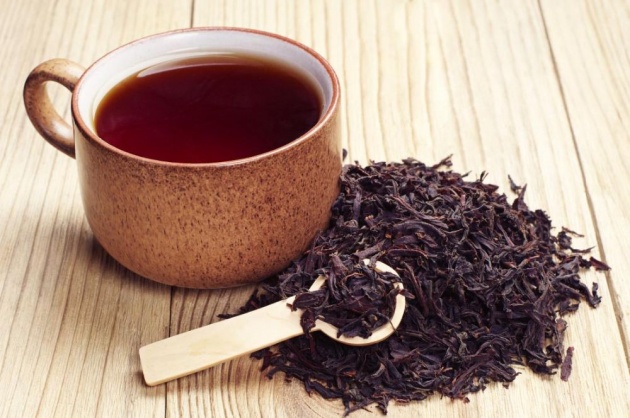 Black tea is a favorite in the Western world due to its bold and full flavor which makes it pair well with many Western foods, especially creamy and sweet foods. The processing of black tea is distinctly different from the other types as it is almost fully--if not fully--oxidized. Oxidation allows the tea leaves to fully develop their aromas and flavors for a few minutes--for a bolder and richer flavor.

Normally, black tea is crushed or rolled with the use of machines in order to release its natural oils which exposes it to the oxygen in the air--and so, oxidation occurs where the flavor and aroma of the leaves become fuller and deeper. After the oxidation process is complete, the leaves are heated and dried to stop the process. The final color of the tea leaves--after all the process they go through--may look chocolatey brown, bluish black, or brownish black. They also have a hint of malt, tannin, chocolate, stonefruit, earthy, grape, and/or citrus flavor to them. And although it is called 'black tea', it actually looks more reddish when brewed.

This is the reason why it is known as 'red tea' (hong cha) in China. 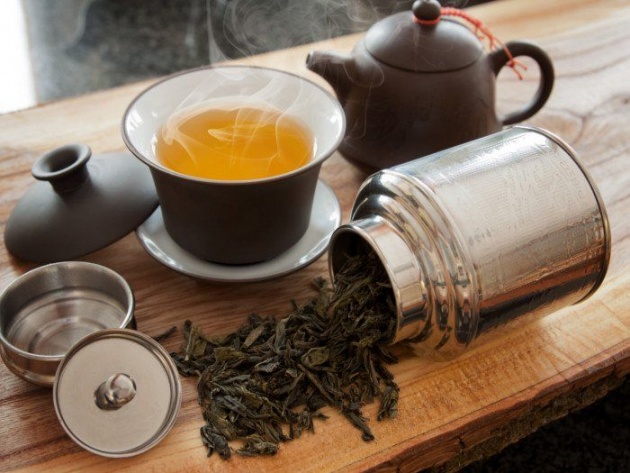 Oolong tea, also known as wu long or blue-green tea, is a favorite among many foodies, serious tea drinkers, and even wine fanatics because of the unbelievable depth and complexity of its flavor. In fact, it is sometimes called 'the connoisseur's tea'. It's flavor, aroma, and purported abilities to support weight loss greatly contributed to its growing popularity. Oolong tea is partially oxidized which gives it a green-black appearance. The green color comes from the unoxidized part of the tea, while the black color is the fully oxidized part. To bring out its natural oils to the surface for oxidization, it is rolled either by hand or machine and then pan fired. It is then left to allow it to oxidize.

During this process, the leaves may be shaped, twisted, or rolled into balls--which differentiates it from green and black tea. This same process is repeated over and over again until the desired outcome and level of oxidization is achieved. After the oxidization process, many oolongs are still roasted in order to further bring out their aromas and flavors. 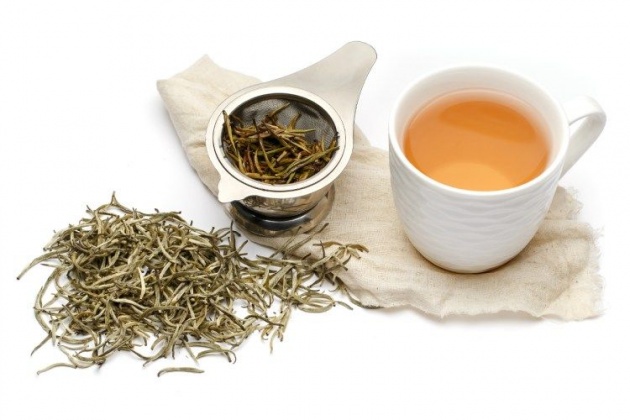 White tea has the most delicate and nuanced flavor among all types of tea as it goes through very minimal processing. It is plucked from the buds of varietals that have a lot of fine white hairs--which new buds use for protection. The buds are then air-dried, sun-dried, or oven-dried as carefully as possible. White tea typically contains less caffeine than any other types of tea but has a high content of antioxidants. White tea is not as popular as black or green tea, especially in Western countries, but it is--slowly but surely-- growing in popularity because of its many desirable qualities. Unlike green tea, the processing has nothing to do with the end result of white tea. Rather, it's the quality of the leaves used that makes the difference.

Plain white teas have a very mellow and subtle flavor. It is so subtle that you may at first think you are only drinking hot water. But with every sip, you will soon realize that it has a hint of field grasses, delicate flowers, cocoa, and dried wood. Some merchants market white tea as caffeine-free. This is simply not true. When it is brewed in low-temperature water for a short time, the tea leaves produce very low amounts of caffeine--so it does still have caffeine. However, according to some recent studies, white tea may actually produce more caffeine than black tea if brewed in boiling water for much longer infusion times. 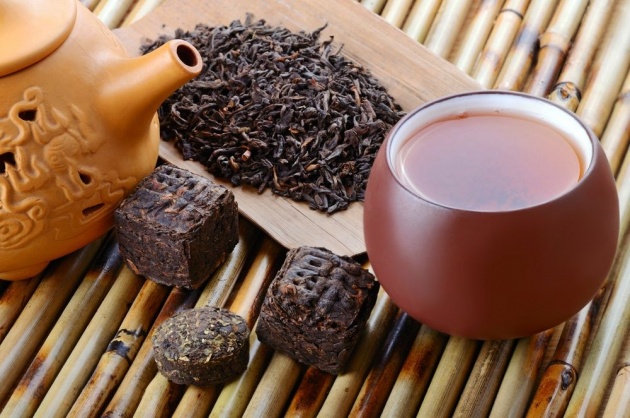 If you've never heard of pu'erh tea, it's because it's a rare type of tea. What sets it apart from the other types of tea is that it is both oxidized and fermented. Traditionally, pu'erh tea is consumed right after a heavy meal as it is said to aid in digestion, as well as help reduce cholesterol. It is prized for its deep, earthy, espresso-like flavor.

Pu'erh initially goes through a processing stage that is very similar to green tea, which results in a product called sheng cha. To make pu'erh, the sheng cha can be fermented in two ways. It can either be 'ripened' quickly by adding heat and moisture or it can be fermented the traditional way where moderate moisture levels and the passage of time allow the tea to ferment. The aging process of pu'erh is expensive. But when done properly, you will surely get to enjoy a smoother and more flavorful tea.

So now that you know the different types of tea, you'll be able to choose the right one for your consumption. But before I go, I'll leave with you with this video of how to make Thai milk iced tea. Enjoy!