What's Up with Upshaw? Someday My Prince Will Come But I Ain't Holdin' My Breath Waiting!

OK, what's been going on with me recently?  I was sitting out at Veteran's Park, plotting my next move as a 'tooner, when seemingly out of nowhere, a priest from St. Mary's Church in East Chicago approaches me.  He obviously remembers me from local events at which I had a caricature booth years ago, because he asked me if I was available to do the same thing for a summer kids' program St. Mary's is supporting at another local church.  I said yes, of course.  This was two days ago; now I am waiting for him to call me to say if it's on or not.

Now I know that this didn't happen by "magic".  It happened because I went into action, and God blesses action.  But action is not easy for me.  There is a certain "princess" part of me who still wants things to just happen, like an old-time Disney Princess like Snow White singing, "Someday My Prince Will Come."  Yes, I know women are supposed to be "liberated" and it's okay for us to earn things--I want to earn things.  But at the same time, I want to be "given" opportunities just like that because I'm "beautiful and good".  Nobody likes a "pushy" female.

So I tell myself, "You want to be a Disney Princess?  Fine.  Be like the original Little Mermaid, who went out and pursued a life on land.  Be like Belle from "Beauty and the Beast," who liked books and reading even though the whole village thought she was strange.  Be like Princess Jasmine from "Aladdin", who wasn't just going to take whatever suitor her father the King dished out to her.  Be like Mulan, who ultimately did "know her place" because she decided where it was.  And lastly, be like Tiana from "The Princess and the Frog", who had an ambition other than "getting the guy", even though her dream of owning her own business was a "strange" one for a young black woman in 1920s New Orleans.  By the way, I'm not mad because Disney's first black Princess didn't end up with Disney's first black Prince.  My brother Paul, who divorced a black woman, is now engaged to a white woman.  Welcome to the family, Karen!

I guess I'm going to be disappointing the Assemblies of God Church, who, as I stated in a previous blog, were against the record number of female lead characters in prime-time TV.  And I'm upsetting certain Disney critics who object to Princesses like Ariel and Jasmine for defying their fathers to be with the men they love. I am not thumbing my nose at male authority--I'm just doing what I love.

And for those critics who think even current Disney Princesses are all about "being beautiful" and "getting the guy":  Read Paragraph Three again.

I leave you with my latest "Our Follies" cartoon, based on an article criticizing President Obama for having no new initiatives just for black women. 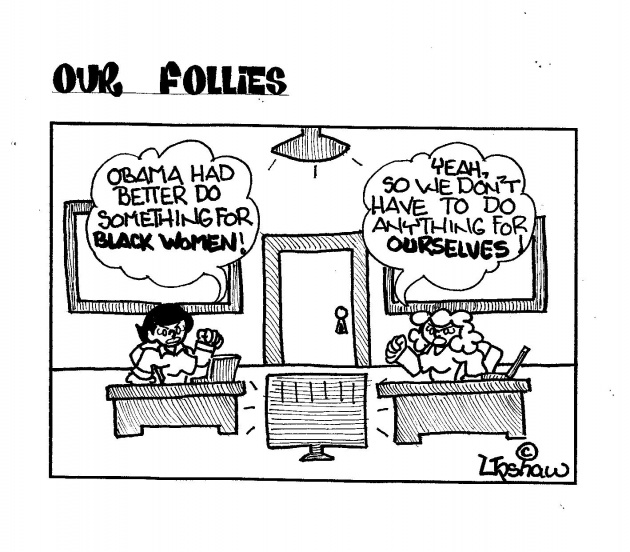