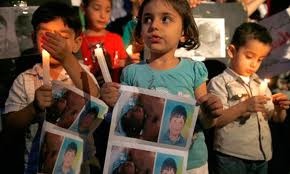 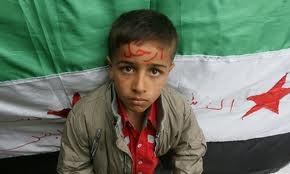 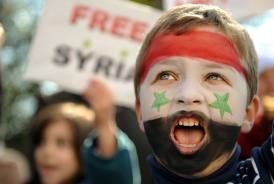 More than 5,000 SYRIAN lives lost since just last March. Worse, many of these lives were CHILDREN, the new COLLATERAL DAMAGE. The Secretary-General’s Special Representative for Children & Armed Conflict, Radhika Coomaraswamy, reports hundreds of child victims and made an impassioned plea to Syria’s Government to end child killing and maiming. The United Nations Children’s Fund (UNICEF) expressed concern that children are being arbitrarily arrested, tortured, and sexually abused in custody. In Homs, indiscriminate shelling has hit hospitals, civilian infrastructure, and children. UN News Center Sources “We have reported cases of detention of children charged with alleged association with armed groups, ill-treatment, and acts tantamount to torture which have resulted in some child deaths,” Ms. Coomaraswamy stressed, adding that her office and its partners would continue to report on the violations committed by all parties in Syria against children. Yesterday, Secretary-General Ban Ki-moon told journalists that the UN and the League of Arab States are considering sending a joint observer mission to Syria to try to end the crisis. His statement came a few days after the Security Council failed to pass a draft resolution that endorsed an Arab League plan to resolve the conflict. In writing this report, I’m personally taking diplomatic talk off the table and expressing emotions that any human being should feel. Last week, Ambassador Muhamed Sacirbey tweeted information from talks underway at the Security Council. DIPLOMATICALLY INCORRECT attempted to give you, the Global Citizen, minute-to-minute details of what we hoped would be progress on the ground and out of the Security Council horse-shoe table. My summary: There has been too much tit-for-tat, behind-the-scenes delay tactics. Children cannot be used as bargaining chips. In gathering photos for this report, I chose not to include the most graphic. They were too hard to stomach. Unless this senseless killing ceases, there are no winners, only losers. Who knows what that lost child could have become and contributed to the greater humanity? When is “ENOUGH - ENOUGH? By, Susan Sacirbey Facebook: “SUSAN SACIRBEY” & “DIPLOMATICALLY INCORRECT” Follow me on TWITTER @DiplomaticallyX Other Film & Blog Reports: “Diplomatic Scuffle, Threats & Fists - Russia & Qatar? By, Ambassador Mo diplomaticallyincorrect.org/films/blog_post/diplomatic-scufflethreatsfists-russia-qatar/45409 “Moscow Flies In To Save Damascus - Assad,” By Ambassador Mo diplomaticallyincorrect.org/films/blog_post/moscow-flies-in-to-save-damascus-assad/45323 Diplomatically Incorrect Channels: diplomaticallyincorrect.org/c/diplomatically-incorrect Humanitarian Channels: diplomaticallyincorrect.org/c/humanitarian

Learn About the Awesome Smile Project

Image credits: Jean Beltran via bitLanders Last Saturday was a very fulfilling day as a person and a…