Why Listen Up Philip should make a star of Jason Schwartzman 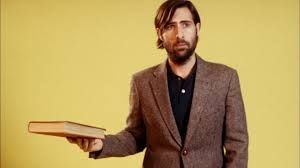 In years to come, when Jason Schwartzman lists the top five characters he has played on screen, Philip Lewis Friedman should be number one. He’ll always be grateful to Wes Anderson for Rushmore, but this is the role that defines him, against which all Jason Schwartzman performances will be measured now and in the future.

I had not heard of the director Alex Ross Perry previously, but with titles like The Color Wheel and Queen of Earth he is destined for ‘what was the name of that movie again’ status. If no one can recall the title, they’ll book for Furious 7, simple as. So he needs to work on his branding.

But boy can he write. And direct. Alex Ross Perry is the complete package - one of those prodigious talents you didn’t think would be allowed to make films. I wondered whether he is just a tiny bit like Philip Lewis Friedman minus (I hope) the personal tragedy.

Philip is the kid who was bullied at school, who took it and took it, and finally said, when he reached a point of achievement (publication of his first novel), that he has the right to his own opinion, which he will make loudly and vociferously and screw the consequences.

At the start of the film, Philip is visiting an old girlfriend and he intends to give her a copy of his second book, Obidant. Only she is late and this annoys him. He remembers that she was always late and this always annoyed him and, you know what, this book I was going to give you, into which I had handwritten a personal dedication, well you’re not having it. I am not giving you this book.

Then there’s Philip’s old writing buddy. They had a ‘declaration of principles’. They were going to be magnificent. But no, the buddy couldn’t keep up. Philip tosses their joint manifesto in a pint glass – his own pint glass (because that’s how cavalier he can be). His (former) buddy is appalled. The pay-off is so cruel you marvel that Philip doesn’t know – or check – his own behaviour.

Incredibly, Philip has a girlfriend, Ashley (Elisabeth Moss). She is a working photographer and on paper – and in the bank, where it counts – she is much more successful than he is. She doesn’t need to be on a ’35 under 35’ list of notable talents. She works on national campaigns.

The relationship is terminal. Neither spends much time in the other’s company. But the point is - they could if they wanted to. The film has a narrator (Eric Bogosian) who does a lot of editorialising. He explains how badly the relationship is going (we see it, buddy). Our narrator is not surplus to requirements - more on him later.

Philip gets a celebrity fan, Ike Zimmerman (Jonathan Pryce), who is a literary phenomenon - or was until he stopped writing. Ike loves Obidant. He sees in Philip the writer he once was. He invites Philip to stay in his country house. ‘New York is creative,’ he explains, ‘but it’s not productive’. (I know what he means – have you ever tried to write in Whole Foods Market?) Philip takes Ike up on his offer of free board and lodging, even daring to ask if the arrangement can be open-ended. Ike marvels how bold and arrogant Philip’s request is; nevertheless, through him, he hopes to feel the stimulus to write again.

There is irony in Ike’s offer. He complains that everyone from his ex-wife to his agent sucked him dry; they were leeches. Philip is like the leech he could choose for himself. You imagine him saying, ‘Philip may be a leech, but he’s my leech – and I can kick him out when I like’.

Now Ashley isn’t thrilled that Philip is moving out. He was of course due to go on a nine-month literary tour to promote his book but, guess what, he’s not doing it. Philip has taken a decision to sabotage sales of his second novel, but he doesn’t care. He’s a bit rock ‘n’ roll. His publishers give him the opportunity to write a piece of popular author Josh Fawn (Keith Paulson) who towers over him. As Josh gets into a limousine, Philip observes his more successful counterpart doesn’t seem to care. ‘Read about me,’ says Josh, ‘I’m charmingly affable.’

Josh is charmingly affable, until Philip decides that he wants to teach him how to take a punch. The ensuring scene is embarrassing, so much so that we don’t need to say the pay-off. (Did you really think Philip would write a puff piece? He has Hemingway on the brain, not Martin Amis.)

When Philip leaves for the country, the narrator comes into his own. Suddenly the focus shifts to Ashley as she adjusts to life without Philip. There is a brilliant flashback in which the camera stays entirely on Ashley’s face as she remembers a date she had with Philip. He was arrogant (of course) but when admonished for being too loud, Philip explodes. ‘What do you mean? I’m in my bar with my girl. Get out!’ The close-up reveals the joy in Ashley’s face at being included – even of course it could have led to a fight. She has that same look as she remembers that moment until a guy in the bar says, ‘what are you looking at?’

The Ashley scenes are emotionally engaging. Perry explores how a woman who has lived through someone else’s nerve endings discovers how to feel. How Ashley becomes a little bit Philip at a photo shoot (with models complaining about cats) and how she sells his stuff in a yard sale (Philip’s first novel – she can’t give it away). When she goes to an animal shelter to acquire a cat, the exchange is telling. ‘Do you have a black and white one? Like a penguin.’ The African American shelter employee looks at her quizzically. ‘I guess colour really matters to you, huh?’ he remarks, pointedly.

The narrator can bring us back to Philip, who agrees to teach creative writing at a prestigious college, having received a recommendation – or rather, ‘an introduction’ from Ike. Philip knows his own worth amongst academics. When a woman asks, ‘where’s the trash?’ he points to himself and answers, ‘right here.’

Away from the city, Philip loses his sense of entitlement. He is genuinely hurt that another teacher, Yvette (Joséphine de la Baume) instantly despises him and turns the faculty against him. In deep resentment, there is attraction. Still, Philip goes back to his cruelly distancing ways, refusing to talk to students outside of his office. When a girl asks for a reference, Philip not only refuses but berates her choice of employer. His alienating techniques make him compelling.

The film builds to an extraordinary scene in Ira’s house in which he and another author invite two women back for drinks and who knows what. Ira invites Philip over. He wants Philip to woo at least one of them, as his anointed surrogate. The women are attractive but much older than Philip. He is happy to play the piano. In any case, the other author in the room is super famous; they write essays about him. Philip doesn’t need to seduce a woman to be happy. The party is broken up by the appearance of Melanie (Krysten Ritter), Ira’s adult daughter, from upstairs. She is appalled that Ike hasn’t changed since he cheated on her mom. The scene is played out from Ira’s perspective, the narrator having switched focus again.

How does it end? The narrator tells what happens in the future. Then there is the matter of Ashley and Gadookey the cat.

Philip does explain himself to Yvette whilst staying at Ira’s over Thanksgiving. His confession is downplayed; he says it because he does not want it to mean anything now, only later after they have parted (for the evening, or perhaps forever?) This confession is for us too, to put Philip’s behaviour into context and to suggest the bedrock of his talent, his ‘literary’ world view. At no point does Philip apologise. Schwartzman doesn’t apologise for his character either. Philip defines and redefines what he might consider to be acceptable behaviour; it is only at the end he feels the difference between how he sees himself and how he is perceived. But he’s not a tragic hero, rather one who needs to readjust.