Why We Ought To Do Like The Chinese: Enjoying Adult Playgrounds

As a Canadian-born Chinese living and working in Vancouver, I never once dreamt of going to China. I felt myself quite content to travel to places that are worlds away from China: places like Mexico, Hawaii, Alaska. I heard about China mostly through movies, books and newspapers and didn't like the country's track record in respect to human rights, etc.  With this in mind, i wanted to keep myself away from the country as long as possible until China fixed up its record. Another reason why I wouldn't want to go there is due to my lack of fluency in Chinese.

But when my family member asked to be accompanied to China, I felt that I had no choice in the matter. Tickets were bought and visas were done.  In a matter of ten hours, we landed safely in China.

To make a long story short, I came away amazed and delighted with the country. Although by no means, I don't support the regime's stance on certain issues, China certainly offers up quite a few lessens that we, in the West, should take seriously.

One lessen this article explores is China's support for  adult playgrounds.  My opinion in one sentence: I love it !  What are adult playgrounds?  It's an area in a park that reserves a section where adults can use a variety of exercise machines .  I was impressed by the simplicity  of the machines and the fact that no admission was charged.

Although we were on a tour that including both sightseeing and shopping, while stopped at a business promoting pearls, we ran down the road to seek out an adult playground we spotted while driving by a few minutes earlier.

We found an assortment of exercise machines that seemed similar to those offered at a regular gym but with some modifications.  On this occasion, while a group of men played a Chinese table game, several older men showed us how to use some of the machines that are different from Western machines.

It seems  to me that the Chinese government is aware about the relationship between exercise and health and is doing its best to promote physical fitness among all ages, especially older people. Clearly. since experts agree that physical fitness is the best way to stave off a decline in one's mental and physical health, why then, do we not do more to promote exercise in his novel way?

On another occasion, I witnessed several older women performing tai chi in a park.

In Vancouver, where I live, cycling, food carts, coffee drinking are all a big thing. But riding a bike is not always convenient since one has to don the appropriate bike clothes and helmet. Going out for a walk in the park, I certianly would like an opportunity to find myself in a park offering easy exercise equipment.  Sometimes change is good. What I hope is that we, in Canada and elsewhere, would adopt the Chinese way too, and make exercise and health a part of life.

If you are planning a trip to China in the near future, don't forget to seek out the adult playgrounds.

And yes, I'm planning an upcoming documentary on this trip. 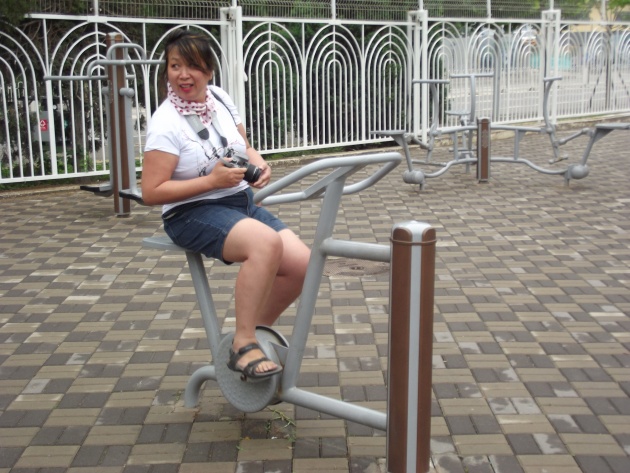 I work in Vancouver, BC, and produce a regular web publication, http://www.wisertraveller.org. I am so excited that I am an author on Amazon as well. I enjoy making films and hope to make it at the Sundance Film Festival or Venice Film Festival someday soon. See you at the movies!