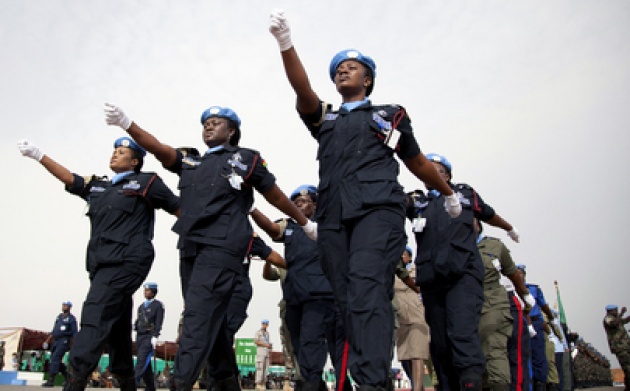 “Elections are the key means for the legitimate entry of more women to public office and for bringing women’s issues into policy debates,” Michele Bachelet, UNWomen Head testified before the UN Security Council special debate on “women, peace and security.” Since January 2011, Ms. Bachelet told the Council, UN Women and the Department of Political Affairs (DPA) have pursued a joint strategy on gender and mediation to increase the availability of gender expertise to mediation teams and the number of women as mediators, observers and negotiators in peace processes managed by the United Nations. “I strongly urge the Council to support increased numbers of women in leadership positions, in constitution-making processes and inclusion in the justice and security sector work of UN missions. Women’s participation in political, legislative, judicial and security institutions is perhaps the greatest resource on offer to promote peaceful and inclusive transitions.” (See Film for Blog Report – “UNWomen”)

Ms. Bachelet cited efforts by UN offices to increase the number of women candidates on their rosters, as well as support for mediation training for women leaders. While noting the results from mediation training efforts in places such as West Africa, the UN Women chief sounded a note of concern.

“Unfortunately, as a rule, the high level of women’s engagement in informal efforts does not translate into significant presence or influence in formal conflict resolution or political dialogue. In the Arab States, women’s contributions to the front lines of democratization have in the main not yet translated into leadership roles in decision-making institutions.”

Ms. Bachelet noted that in political transformations, already-organized political interest groups are most successful at seizing power, while women’s groups tend to be underfunded and are often poorly positioned to seize opportunities to influence politics. “Given the current crisis in Syria, this remains a matter of concern. Women’s participation is vital both in resolving the crisis and in making sure that women’s interests are addressed in agreements moving forward.”

Head of UN peacekeeping, Under-Secretary-General Hervé Ladsous, provided an update on security, protection and equal participation of women in countries hosting peacekeepers, with a focus on political participation and the protection of women. “They are especially critical because they represent both the opportunity for women to make their voices heard, and to shape the peace, but also the risk that women face from insecurity, sexual violence and targeting of civilians,” Mr Ladsous said. “Peacekeepers must work to maximize the former, and minimize the latter.” (See our Film for Blog – “Female Police”).

The peacekeeping chief said the Council’s resolution 1325 guided the Department of Peacekeeping Operation’s (DPKO) efforts to support women in post-conflict countries. Voted on in 2000, the resolution calls for action to reverse the egregious and inhumane treatment of women and girls during conflicts, the denial of their human rights and their exclusion from decision-making in situations of armed conflict, in peacemaking and peacebuilding: “Political participation and protection of women are cornerstones of our efforts in supporting the implementation of resolution 1325. These can include, for example, use of temporary special measures to increase opportunities for women to gain elected office; outreach to women’s groups; training of female candidates; enhanced security for women by national police and working with political parties to encourage women’s participation,” he said. “In terms of electoral assistance, we all work in close coordination with DPA which has the General Assembly mandated system-wide leading role on UN electoral assistance activities and policies.”

Whether perpetrated by combatants, (as in the Democratic Republic of Congo), or by peacekeeping forces in some instances, (as most recently in Haiti), the issue of sexual violence remains pervasive. UN officials acknowledge the broader problem, although it is difficult to comprehensively assess how much progress has been achieved. “Our peacekeeping missions cannot act as a surrogate for state authority. We must do our best to strengthen frail state institutions to facilitate their ability to better protect civilians. We must also be prepared to protect civilians directly…We can do so by strengthening awareness of the link between stronger national security institutions and lower instances of sexual violence, where conflict still flares,” the Had of UN Peacekeeping offered while also noting that DPKO remains unsatisfied with some of the protection offered to women in places where peacekeepers are deployed.

“Host countries must do more, and peacekeepers must do more, to redress the threats faced by women in our mission areas. In states where the capacity of both the civilian and military justice systems remain weak, efforts must be renewed to strengthen judicial and military institutions – this is definitely the long-term solution to providing protection for civilians.” See Video for Blog – “Is Sexual Violence Inevitable?”