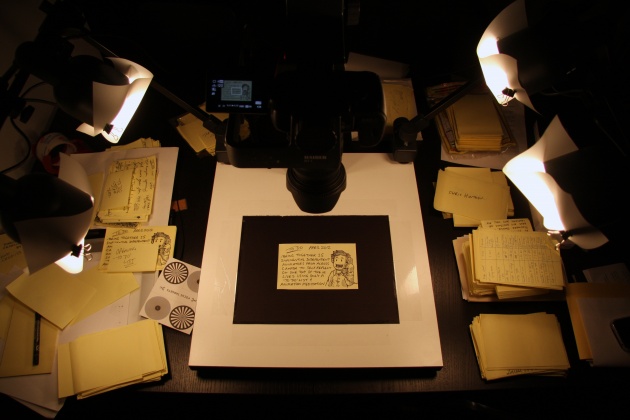 With the online release of my short animation Yellow Sticky Notes | Canadian Anijam I am including this blog post with artist statements from the 15 animators involved in the project.  All the segments are the personal reflections of each of the animators and it's great to have the context behind their work.  Below you'll be able to watch the film and read the statements in order of appearance in the film!  Enjoy!

As a kid, long time ago, I was walking my parents old dog and an unfriendly neighbour falsely accused our dog of having dumped his little morsel on the sidewalk in front of her house and why didn't the police do anything about it.  Our dog died shortly after of indigestion, so that was the end of the story.

The two more memorable events that took place in the last 25 years was the birth of my first son and how thrilling that was. And more recently seeing on the cover of Time magazine that the world population had hit 7 billion people - hot on heels of the world achieving 6 billion people just within the life span of my son. There's a real conflict of interest going on here. I'm thrilled that my son was born, but a lot less so that everyone else is enjoying and celebrating that same thing.

2003 was my first summer out of animation school and I spent it working...every single day.  Although I had two fantastic jobs, the lack of sleep and busy lifestyle left me quite miserable. It wasn't until the 2nd largest blackout in history, which left the large parts of eastern Canada and the United States without power for up to 16 hours, that I was finally able to stop and enjoy a beautiful, if not extremely dark, evening with my now husband.  In fact, I will always remember the blackout as a critical turning point in my career and life, where, by no strength of my own, I learned that there are more important things than just work and killing yourself to meet a deadline.

I was in the middle of a meditation retreat when Obama was elected in 2008, and one major thing I noticed during the retreat was the way that my mind was relentlessly trying to fabricate meaning out of the events around me. It was fascinating to be having such an internal experience while such a major event was happening in the outside world. My mind wanted to have it all mean something important, but the reality was that I was sitting there breathing!

Our piece is about the forest devastation in British Columbia caused by the mountain pine beetle.  While driving through the BC interior on our way to teach high school students animation, we couldn't help but notice the huge swaths of dead pine trees, killed by the tiny mountain pine beetle.  It seemed so horrifying that such a little creature could reap such devastation, as if there had been a forest fire.  It seemed frightening, so we thought we would represent our fear as a kind of fifties sci fi bug nightmare.

Wiki Leaks - data unleashed by a lone and lonely agent, frustrating the secret daily operations of the most powerful nations and individuals on the planet and the subsequent inability of the powerful to suppress and hide that information. Privacy issues writ-large. Alas, we live at the mercy of the powerful nations and individuals; amassing and aggregating the raw data of our daily activities.

It was the day of the Stanley Cup finals between Boston and Vancouver in 2011.  Being a Vancouver resident good ol’ Canadian, it was hard not to get caught up in the buzz surrounding the idea that the Canucks could finally win the cup! Although, that day on route from Newark with a transfer in Toronto, I was stuck inside of a stuffy airplane parked on a hot tarmac for 5 hours due to an airline strike.  There was no grounds crew in sight to depart the plane. I had even rushed to the airport hours before and switched my flight to an earlier one so I could make it home to watch the game with friends.  Unfortunately, I arrived into Vancouver only to see the city burning and broken due to the riot caused by the Canucks losing game 7 in their hometown. For days afterwards, I was bombarded with images of hordes of people on the news cheering as people smashed windows, looted, and burned cop cars.  The same kind of cheering that people did during the playoffs when the Canucks made it to the finals.  My piece is a reflection of how humans really are the strangest creatures to ever inhabit the earth and the fine-line between controlled celebration and out-of-control mayhem.

Whether at the helm of an ocean liner, or in the bathtub, we should remain alert and try to control ourselves.

In children's animation, characters always have to "think" conspicuously. A "think" takes about 20 frames of the ol' finger to the chin, squinty eyes looking up and sideways and then another 10 frames of "eureka". I animate a lot of these kinds of shots - I can do thinking without even thinking. So I crave a bit more freedom when drawing about thinking.  With the idea of more creatively rendering what thought might look like, news came out about a proposed internet spying bill. This law could legally take a citizen's thoughts as they manifest through email, internet browsing, social networking or something as banal and trivial as a 'to do' list written on a private computer and put them under scrutiny and suspicion. This is an animation meditation about how such a law might lead one to think rather less conspicuously while in front of a computer.

Raymond Taavel, a loved spokesman for gay rights and all around wonderful human, was murdered one block from were I live in Halifax, Nova Scotia.  The murderer suffered from mental illness and was granted a day pass to go out into the world.  He stayed out past his allotted time, then murdered Raymond. It was a tragic loss for the community that could have easily been prevented.  In situations like this it is hard not to focus on how tragic it is, but many chose to focus on the how it brought the community closer together.  Turning an extreme negative into a positive.

I celebrated my 38th birthday on June 5, 2012, which happened to also be the Transit of Venus.  This is an astronomical event where Venus passes between the Earth and the Sun in a way that creates a tiny eclipse, viewable from many parts of our little planet.  The next one will happen in 2117, and perhaps my daughter will see it.   I happened to be pregnant during the making of this piece, and wanted to tuck that in there as well, hence I am eating my entire cake.  I like the way that astronomical events tend to put our tiny existences, and all of our little human joys and tragedies, into galactical perspective.  It doesn't make me feel insignificant, but rather orientated.  I know where I am in this world.

Instead of starting with a major global event, I started with a recent, major significant life experience which was a several year struggle with an out of control chronic illness, something I've always fought with, but in recent years it spiraled out of control. During those years, many of my to do lists would be health related, listing doctor appointments, prescription renewals, etc. During this health crisis, many grass-roots protests were taking place around the world, from anti-war protests, to G20 summits, to the Arab spring, to the Occupy movement and finally in my own city of Montreal with the student Red Square protests. I hope that through my animation, there can be an interesting interplay between my personal crisis and the emergence of these various protest movements around the world.

Being the first time in a long time that I'd animated on paper, I wanted to do something that would reference the basics of animation.  I settled on a version of a walk cycle.  I made this piece in an apartment in Brooklyn, with no air conditioning during one of the worst heatwaves in recent history.  Then, on the day I started drawing, the clouds cracked open and it started raining - pouring - likely, old men somewhere were snoring.  And all while, Egypt was wringing its hands over who would be its new president, and the Western world was still weighing the pros and cons of hoodies (aka bunny hugs).

I’ve always wanted to know more about my ancestors. Where were they from? How did they get there? When I was young I should have asked more questions, but I do know they came from Russia, Romania, Turkey and Egypt. But that's relatively recent history.

My To Do list, which I’m sure I’ll get around to sometime, includes building a time machine and going back in time, with Tulip the dog along for the ride. Finding an ancient tribe of my ancestors will surely be a life-changing event! But why stop there? We could physically regress back through the millennia, until we reach a point where our common ancestors are amoebas. It would be great to meet them!

Watch the entire film below and please subscribe for updates on new films and blog posts!  Thanks!