Something That Happened When I Was Young

My name is Gulchehra and my life story is bad. I don’t want to make you sad, but something happened to me when I was young.…… 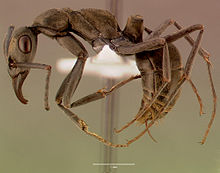 This article is about a type of ant. For the 2014 video game culture controversy, see Gamergate controversy. Lateral view of a female……

BLOG: A story about Shampoo